An errant ambulance caused utter chaos on the track at Richmond 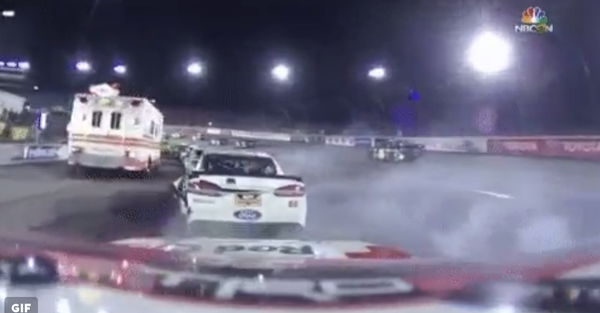 An ambulance was blocking pit road late in Saturday’s race at Richmond, and drivers weren’t aware of the ambulance’s presence.

A wreck between Danica Patrick and Austin Dillon caused the ambulance to make its way on the track, but the ambulance wasn’t supposed to be there when the drivers made their way back around. It caused a wreck between two drivers attempting to make the playoffs.

Related: NASCAR officials overreact and call a caution for no reason at Richmond

Matt Kenseth heads to the garage after damage while drivers scrambled to avoid a safety truck! #NASCARonNBCSN #NASCARPlayoffs pic.twitter.com/HIXVJtYfsD

Bowyer returned to the race, but Kenseth’s car was taken to the garage. He told NBC Sports after he went to the garage that he couldn’t get stopped before the collision.

“We were all just coming to pit road and I saw an ambulance sitting there,” Kenseth said. “Everybody was stopping and I just couldn?t get stopped. I didn?t see it in time and ran into the car in front of me.”

Kenseth was in the playoff field before the race started, but he might miss the cut if a winless driver wins at Richmond.