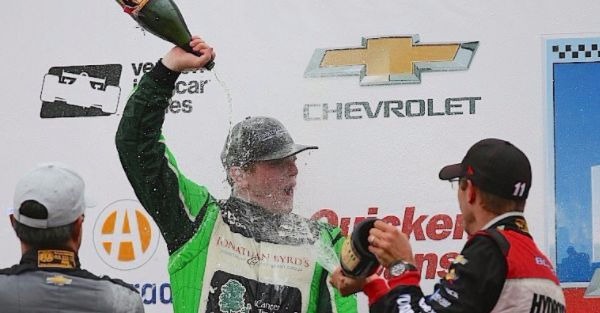 Conor Daly received news today that he wasn?t expecting. He?s out at A.J. Foyt Racing after just one full season with the team.

“I’m very disappointed because I planned on being with A.J. for the immediate future and I thought things were looking good,” Daly told RACER. But he added, “I’m grateful for the opportunity Larry and A.J. gave me and I respect any and all decisions because they were the first ones to give me a chance. But I wasn’t prepared for this outcome.”

Daly might not have been prepared because he finished the 2017 season on a strong note. He finished fifth at Gateway, came in 10th at Mid-Ohio, and crossed the finish line 10th at Sonoma. However, he still only managed an 18th-place finish in the point standings due to a rough start to the season.

This recent change at A.J. Foyt Enterprises comes just weeks after the team announced 42-year-old Tony Kanaan would replace 25-year-old Carlos Munoz in the No. 14 Chevy sponsored by ABC Supply.

Daly?s rumored replacement at A.J. Foyt Racing is Indy Lights driver Matheus Leist, according to Motorsport.com. If this turns out to be true, it would give Kanaan, a native of Brazil, a younger Brazilian driver to mentor as he completes the final chapter of his career in the Verizon IndyCar Series.

While the future is unclear for Daly, Motorsport.com reports there?s a chance he could drive the No. 20 Chevrolet for Ed Carpenter Racing on road courses, while Carpenter would handle driving responsibilities on oval circuits.

One thing is clear though and that?s Daly has no intention of giving up his IndyCar career ? at least not without a fight.

“I’m an IndyCar driver and I know I can do this and I’ll never stop pursuing it because I believe in this and in myself,? said Daly. ?I’d just love the chance to spend a couple years with the same team.”