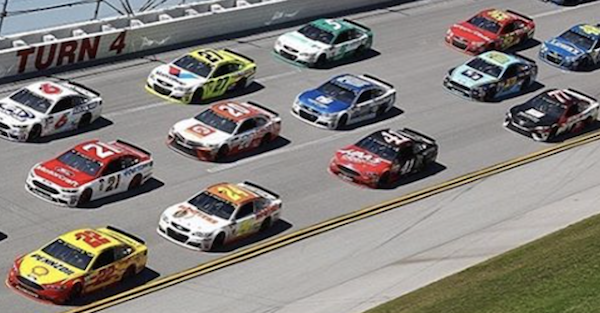 You can currently count all the auto manufactures racing in NASCAR on one hand, but throughout their 69 year history, there have been 16 different automakers who have won at Nascar’s top level.  Some of these you may have forgotten even existed but in their heyday were able to pull off at least one victory. Let’s start off with the all time champion: Chevrolet.

Chevy has been in NASCAR since 1955 and has won 769 races. Chevy really began flexing its muscles in 1963 when it released its “Mystery Engine,” which ended up being a big block engine that Chevy later put in some of their most popular muscle cars of the 60s and 70s.

Ford is right behind its rival Chevy with 653 races won. The blue oval joined up around the same time as Chevy. They have had major success with the Thunderbird in the 80s and Taurus in the 90s-00s. Currently, they run a Fusion race car. With teams like Stewart-Hass and Roush Fenway Racing, it is very possible that they close the gap with Chevy in the next few years.

It’s clear the top two have been dominant over the series’ history as number three goes to Dodge at 217 victories. Dodge’s first win in the premier division was in 1953. The Dodge Charger was the first car to use a rear spoiler in 1966. The 70’s were very successful for Mopar with Richard Petty and his Charger racking up four championships. Who knows what Dodge’s numbers would be like had they not quit NASCAR from 1977 to 2001.

Number 4 is a separate team even though Plymouth had the same parent company, Chrysler, as Dodge. Plymouth was discontinued in 2001 but not before racking up 190 wins. Plymouth is also well known for its days with Richard Petty. Petty won 10 races in a row for Plymouth, breaking a NASCAR record.

Pontiac pulled out of NASCAR in 2003 and had totaled 155 victories. Bobby Labonte was the last Pontiac driver to win a championship. Pontiac was one of GM’s sub-brands and was canceled due to redundancy in having the brand compete against itself.

Oldsmobile was one of the originals in NASCAR and had a huge year in 1951. They totaled 115 victories before getting axed by GM in the 90’s. They started off with the Rocket 88, then the 442 and finished off in the 80’s with the Cutlass.

To break things up a bit, we have Toyota: A more recent contender in NASCAR that is still going strong. Toyota is no stranger to racing and it is no wonder in only 17 short years they have 97 victories.  They just had their best season last year with their Camry winning 16 races.

Mercury, a sub brand to Ford, made it pretty high on the list at number 8 with 96 victories. Most remember Mercury for their dominating Cyclone Spoiler II, which won 21 races in the 1970s.  They only produced the car for the public to be allowed to race it in NASCAR.

Who remembers Hudson? If you don’t, it’s ok. Most of their wins came in the early 50’s. They won 66 races in those early seasons, bringing their grand total to 79.

The original Grand Parent car company, Buick, did not mess around when it came to NASCAR.  They took over in 1981-82 with 47 victories. These wins paved the successful path of one of the most iconic cars to come out of the 80’s: The Grand National.

Good ol’ AMC makes it on here at number 12 with 5 victories. Their history is brief, but the tri colored red white and blue AMC cars can not be forgotten in NASCAR history.

The first Strictly Stock race was won by Jim Roper who drove the winning car from Kansas to Charlotte Speedway after seeing the race advertised in the comics section of the newspaper. He drove a Lincoln and Matthew McConaughey’s favorite car brand has won four times.

Another oddball comes in at number 14 with three wins. That would be Studebaker. They did this all in 1951 and left on a high note, never returning to NASCAR again.

Nash is acutally making a comeback to NASCAR later this year…. Is it too late for an April fools day joke?  Nash won one race in NASCAR and it was done on April fools day in 1951 at Charlotte Speedway.

The Brits have to be on this list, right? Well they’re dead last but it still counts. Jaguar won a NASCAR race once. It was 1954 and they were up against a few Euro cars that year, including a Porsche, MG and Austin-Healey.

Now you know all 16 winning car manufactures. Rumors have been floating around for some time that NASCAR will be getting another brand to join in the fun. Some say VW or Nissan could get in the game, but only time will tell.

Related: This young woman is the future of NASCAR