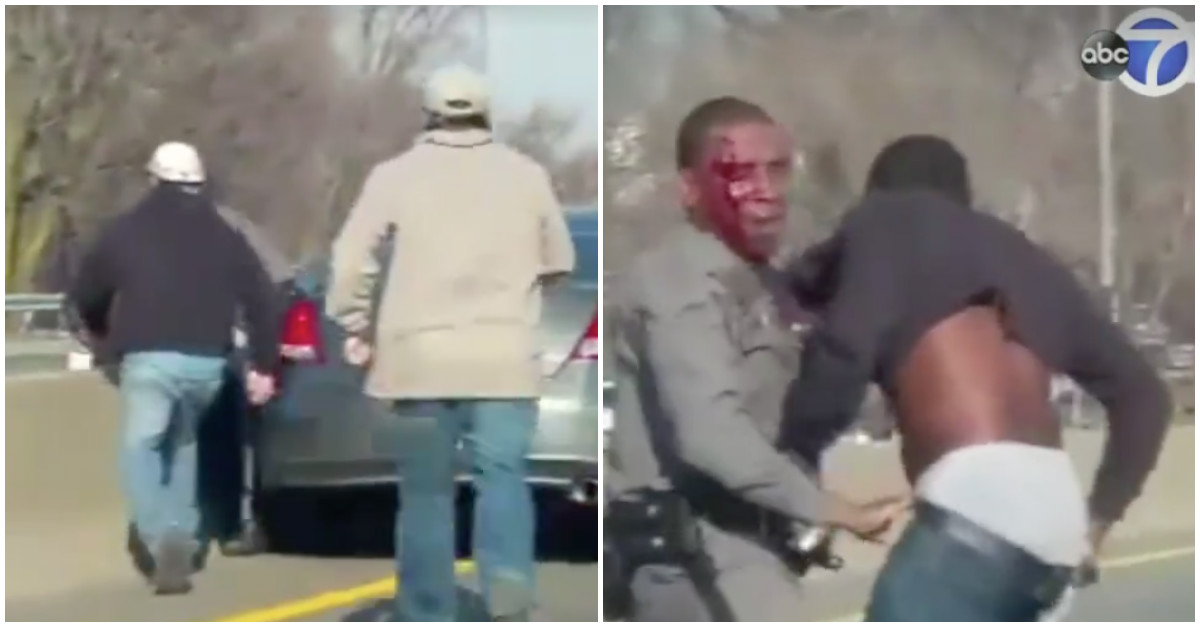 Wild video out of Long Island, N.Y., shows the dramatic moment two law abiding citizens stopped their cars on the Southern State Parkway and assisted a bloodied state trooper with the restraint and arrest of the man he had pulled over.

According to witnesses of the incident who spoke with ABC 7 News, the trooper pulled over 29-year-old Kyheem Kelly and ended up getting dragged across three lanes until he hit the median on Wednesday.

RELATED: Cops help an elderly woman who said she hadn?t eaten in quite some time

The trooper was reportedly hanging from the window.

But once the officer get his footing, he could be seen grappling with Kelly on the side of the road.

“He floored this car, you know the cruiser was right behind the suspect’s car, and he literally just floored it with the cop hanging out, you literally see the cop’s legs hanging out outside the vehicle,” a witness told ABC 7.

The video show two law abiding citizens getting out of their vehicle and running to the aid of the police officer.

The witness described them as Good Samaritans and said the surreal incident was like something out of a movie.

“A couple Good Samaritans hopped out of their vehicles, when the officer got the guy, the suspect, out of the car, and as he tried to get him restrained, two Good Samaritans came out of their car and held the guy down,” he said. “It was like a movie. It was right in front of your face, and you don’t even believe it’s happening.”

Their assistance gave other law enforcement to arrive on the scene and haul in Kelly without further incident.

The trooper is being treated for head injuries but is expected to recover, according to News 12.

RELATED: A California sheriff?s department called out its deputy for threatening on camera to ?create? charges

This article originally appeared on Rare,