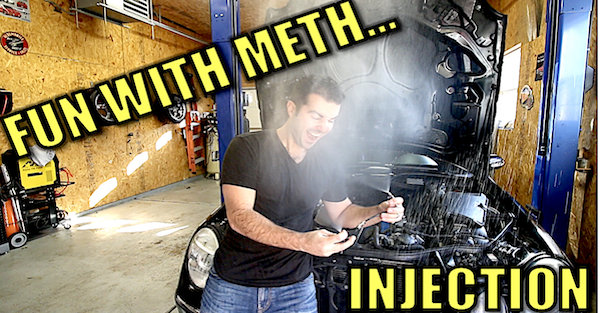 Making more horsepower in a modern day engine has gotten progressively easier over the years. Factory forced induction makes it easy to bolt on parts, and make loads more power. The issue now is that the highest octane fuel available everywhere, other than E85, is 93 octane. That type of fuel can support a lot of power but like we see with the Dodge Demon, the full potential of some engines are only realized after switching to a higher octane fuel. In the case of the Demon, its crazy mid 9 second time slips are accomplished on 100 octane.

Many have turned to E85 with its over 100 octane rating, but some either don’t want to pony up big money for a fuel system, or their car isn’t able to run that type of fuel easily without major computer control changes. So what are you to do? The answer rests with something we all can’t live without, water. Water injected as a fine mist into an engine can increase the potential horsepower output in a few ways. In my latest video on the LegitStreetCars YouTube channel, I perform an installation of a water/methanol injection kit on my 2003 Mercedes-Benz E55 AMG. My goal with this install was to provide a system that would lower my intake air temperatures, and thus reduce the amount of ignition timing that is reduced by the engine’s computer. The lower the intake charge, the less timing it reduces, the more consistent power the engine makes. The E55 uses whats called a Lyshom style supercharger that is bolted directly on top of the engine. This coupled with that fact that it has a very small intercooler, means that intake air temperature is a big problem, especially when you start adding boost.

I installed a dual nozzle Snow Performance kit I had receive from Victory Road Performance. VRP also provided an adapter plate for the throttle body to house one of the two nozzles. The 2nd nozzle went right after the intercooler, which is located below the supercharger. I drilled and tapped for the lower nozzle, and installed all the fluid lines under the hood with heat reflective tape. The controller has settings that change when the kits is activated, and controls how much flow you want at certain boost levels. The pump is mounted very nicely behind the passenger fender and most of the wiring is hidden under a panel and carpeting on the passenger footwell area.

When deciding on a water/methanol system its important to figure out what you want the kit to accomplish. Although spraying water into the engine has many benefits, most introduce a mixture of water and methanol for even more performance gains. Since the goal for the E55 was simply a reduction in air temperature, I decided to run a 90% water and 10% methanol ratio. This mixture won’t affect the air fuel ratio, and will not require me to have a special tune with water/meth in mind. This type of system also does a fantastic job of cleaning your engine. It has been documented for years that engines running a water/methanol injection system can look close to brand new even after thousands of miles. Think of it as a steam cleaner for your pistons and valves.

If your goal is adding a lot more power, you may have to take some risks. I also own a Turbo Trans Am that makes 850 horsepower to the wheels. It too uses a dual nozzle kit, but the two systems differ in many ways. The system on the Trans Am runs 100% methanol, and it replaces about 25% of the total fuel needs of the engine. The goal with this system was to introduce a higher octane fuel along with lowering intake air temperatures. With this massive increase in octane, I’m able to run more timing, and more boost without experiencing any detonation. It’s worth noting that any failure of a system like this could result in a catastrophic failure of the engine. Because I tune this car myself, I’m able to monitor the performance of the system very closely so for me, the risk is worth it. I’ve also introduced safety strategies into the cars computer to realize when the kit is not working, and reduce the ignition timing drastically. The horsepower gains from this kit primarily comes from the fact that methanol has an octane of around 110. This allows me to run about 7 psi more boost than when using just 93 octane. In my case, this equates to about a 200 horsepower gain.

For a detailed look at what a water/methanol kit installed on a car looks like, check out the video. I also go over how the system functions and some safety items you can install to make sure your engine is protected. The E55 will be going back to the dyno soon, so a comparison of horsepower with, and with out the water/methanol is coming, stay tuned.

Related: A former dealership technician explains how to get the best bang for your buck on repairs