This 1,000hp Trans Am has an ingenious launch control setup 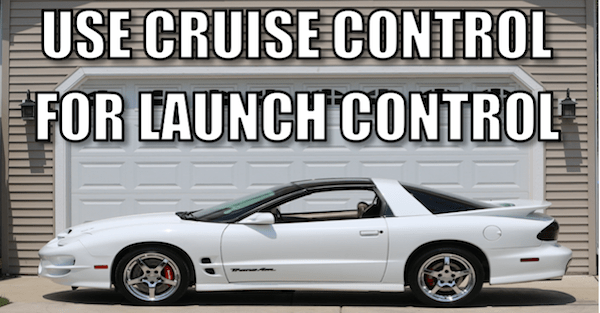 Building a car that has both form and function is difficult. Making your car unique at the same time is even harder and with new cars coming out with loads of tech and even more power, building your own car seems a little less impressive.

If you build a car with drag racing in mind, can you have it be a real street car too? Can it be as fast as say, a Dodge Demon and have more options for a fraction of the price? It would have to be a functional car that retains all creature comforts the original design team included and truly is a “no special instruction” or ” zero compromise” type of car. The term street car has morphed so much with shows like “Street Outlaws” that now if you have a car that can be driven off a trailer onto a street for a minute you can claim the title.

You may know this car already from other videos on my LegitStreetCar YouTube channel but basically it’s a 2001 Trans Am WS6 that runs 9s in the quarter mile and has 1,000 crank horsepower on 93 octane with methanol injection. I drive on the street for everyday tasks like buying groceries, driving to work and even road trips. It has a full interior, air conditioning, radio and most everything else a stock Camaro or Firebird could have.

In my latest video, I cover some of the coolest and most unique modifications I’ve performed over my 14 years of ownership. I start off with a boost activated exhaust cutout. I bought this from Sound Performance and it’s their 4 inch version as my 88mm Comp Turbo required that size to be able to breath properly. In the video, you see the custom down pipe I made that allows me to run through a muffler during normal driving and then automatically have the cutout open when I get into boost. No buttons, switches or any fiddling, just mash the gas and it opens immediately. One unique aspect of the install is that it doesn’t actually run off boost pressure rather its source is exhaust back pressure. I did this because back pressure is higher than boost pressure and it allows for the valve to open earlier. This thing is definitely a screamer at full throttle.

The next feature brought us to the rear of the car where the factory spare tire and jack used to be. There I installed a small air compressor and a 1 gallon air tank by ViaAir. The primary purpose of this setup is to feed my Boost Leash boost controller and wastegate, but since I had an air tank in my car I could also hook up a tire inflator/gauge. I can now fill my tires with the on board air system and also adjust the air pressure in my rear coil spring air bags that I use for a more even launch.

Number 3 is a cool feature that comes with my Boost Leash boost controller. Now if you haven’t heard of this controller yet, you’re missing out. It’s a 5 stage time activated controller that also lets you change ramp rate, the amount of time it takes for boost to come in, launch boost level and it’s final nifty feature called “Scramble.” The option requires you to hook up a momentary switch and wiring to the controller. I installed my button under the dash on the driver side right next to where my left foot normally rests. What I can do is program a certain amount of boost that’s activated when my foot hits the floor mounted button. That extra boost gives you a little kick at the press of a button. Think of it like putting “Fast and Furious” style go-fast button on the car. If you’re losing a race, you can hit the button to give yourself a momentary boost of power, pretty cool!

The last two items use the original cruise control/wiper stalk. Now originally my car came with a six speed manual, but I converted it to a Finish Line Transmission Level 7 four speed automatic for more consistency at the track and because I used to go through clutches like underwear. Since I went to all the trouble of that conversion, I wanted a kick ass version of Launch control so I installed a trans brake, an ignition based Lingenfelter 2-step and I wired the adjustable launch boost feature into the system as well. This way, off the line I can set the rpm and the amount of boost while the trans brake will engage first and reverse gear in order to hold the car.

Needless to say, this thing takes off. So much so, the front wheels come off the ground. If you’ve ever been in a car that does that you know you want both hands on the wheel. To accomplish that, most put a button on the steering wheel with an old corrugated phone cord attached to it. It looks pretty bad, so I wanted to find a factory style solution. I never used my cruise control so I pulled a wiring diagram and found which wires are active when certain buttons are live. I now have a fully functional launch control that’s activated by holding the original decel button down on the cruise control stalk. The fact it still needs to be armed like factory cruise acts as a safety.

Since I was there and I needed a way to lock up my torque converter manually, I utilized the accel switch on the stalk. I went with a triple disc lock up torque converter that works like stock when cruising but can manually lock into 3rd gear, reducing converter slip to nothing and extending that gear out longer when drag racing. I can now keep both hands on the wheel for that too for added safety.

Honorable mentions went to my awesome CTS-V Brembo brake calipers with 14 inch 5th Gen Camaro SS rotors as they make the car stop on a dime. Second for honorable mention was my custom AC setup that required a modified core support and a Griffin radiator to clear the big 88mm turbo. I also found great puller fans at the junk yard for $50 from a 2001 Saab 93 Turbo. The AC works great and when it’s 90 degrees and 1000% humidity in Chicago, I’m glad I kept it.

Now sit back, relax and enjoy the sweet sounds of a turbo LS engine ripping down a forest lined street — in Mexico of course.

Related: This Trans Am will make you wish they were all coming back!