Two car companies were sued over this factory defect 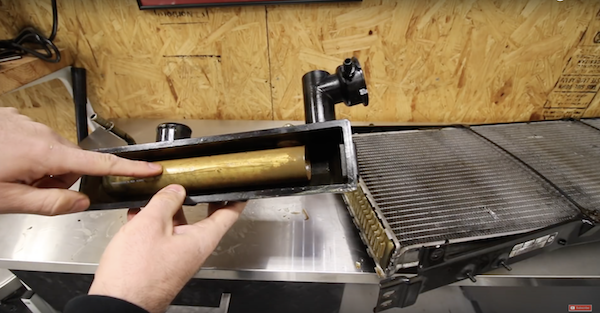 Cars break down. It happens on cheap cars, it happens on really expensive cars. We like to think some automakers are better than others at making a reliable car, but the truth is they all have their faults.

I realized this after working on cars for over half my life and decided to incorporate interesting factory defects into my YouTube Channel, LegitStreetCars. My latest video covers a defect with radiators that have integrated transmission oil coolers, and I couldn’t just pick one vehicle to use as my proverbial battering ram.

The truth is many cars come with trans cooler built into the radiator and if those coolers leak, coolant and transmission fluid mix. This mixture will make its way into the transmission and destroy it in short order.

In this video, I show you a 2008 Nissan Xterra and my own 2003 Mercedes-Benz E55 AMG. Both companies had issues with this style radiator, and both companies were sued over it. In both cases, the coolant would contaminate the transmission and cause the clutch friction plates to deteriorate. This, of course, would happen out of warranty and cost the customer thousands for a new radiator, transmission, torque converter and fluid.

Nissan settled their lawsuit to avoid legal fees and offered an extended warranty to the owners of the 2005-2010 Nissan Xterra, Frontier and Pathfinder. Mercedes didn’t do anything but update the radiator a year after discovering it was faulty. They did not offer a warranty or issue a recall. This problem occurred in the 2003 E, CLK, and C Class and the repair could cost up to $7,000 at the Mercedes Dealer.

Because this issue affects many different makes and models, I wanted to figure out a way for people to test their transmission fluid for contamination to determine if they needed a new trans cooler/radiator combo. I found a company called Acustrip that sells coolant contamination testing strips for about $1 each. They sent me a bottle of 50, and I went to town testing them out. All you do is put a little bit of trans fluid on the end of the strip and wait about one minute. It will change color, and then you match it up with the provided color chart to determine how much if any coolant is in your transmission fluid.

If you find coolant and you have no symptoms, you could just replace the radiator to prevent more leakage, or you can install an external transmission cooler to eliminate the issue altogether. You can also do this if you don’t have contamination but know your model car is notorious for this issue. If the leaking cooler is not caught almost immediately, you will experience harsh engagement, a slipping transmission, a humming noise and feel a shuttering.

I started a google doc to list all the common offenders so check it out in the description box of the video. Enjoy!