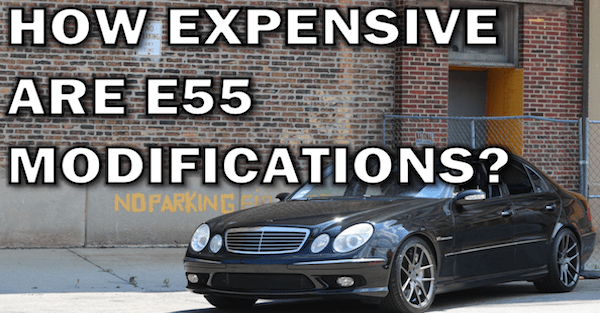 Modifying a car for performance is never cheap if done properly. Even if you do all the work yourself, good quality parts are expensive. Modifying a European car can get even more expensive, but on an older model it’s not nearly as bad as you think.

In my latest video on LegitStreetCars, I go over exactly what the previous owner modified on my 2003 Mercedes-Benz E55 AMG. I show you what he paid and take a look at a bunch of new parts that just came in and their cost.

My goals for this car are pretty simple. I’d like it to be about a second faster in the quarter mile which would mean a mid to low 11 second run (I believe about 600 horsepower should do the trick.) Next, I’d like this slow shifting 5 speed automatic to shift faster. Finally, I want the car to sound like it actually has a blower on it.

The E55 is factory supercharged but, in typical Mercedes fashion, it’s quiet to appeal to the higher end luxury car market. I’d also like to retain all factory options and not affect reliability at all. It’s a tall order, but this is an excellent platform and it’s going to be a blast.

The previous owner did a few mods but the only two that will stay with the car are a pair of Eurocharged mid length headers that run about $600 and an external trans cooler that costs about $75.

I decided to go with Victory Road Performance for all the performance parts I show in the video. What I like about VRP is that it’s a one stop shop for these cars and they carry some pretty neat, E55 specific parts like the methanol injection kit I bought. It’s a normal Snow Performance kit but comes with an E55 throttle body plate so you can directly screw one of the two nozzles in. The other goes post-intercooler and you can use your factory washer tank to hold the methanol/water mixture. This kit is $599.95 which is pretty typical for a methanol kit for any car.

I’m going to be swapping out the factory heat exchanger for a larger VRP unit. They claim a drop of 8 degrees in intake air temperature and they sell for $400, which is again basically the same price for any heat exchanger.

To complete the cooling modifications, I received a Superflo coolant pump and an under hood mounted coolant tank, each item retails for $350 on the VRP site. All of this will make for a great start to keeping intake temperatures under control and prevent the car’s computer from pulling timing.

For fueling, I went with some 650cc fuel injectors that cost $365 and come with adapter harnesses for an easy install. These are way overkill for the car but at 104,000 miles they are cheap insurance and will allow me room to grow in the future.

The biggest horsepower modification for “phase 1” of this project would be the 85mm throttle body I ordered from VRP. The factory unit is 74mm and some have seen upwards of 40 wheel horsepower increases from this mod. This entire kit with a ported blower snout and adapter ring is $1,000. If you look around, even for naturally aspirated domestic cars, this price isn’t that crazy. It may seem like a lot, but for 40 horses it’s definitely worth it.

Next up were some supercharger gaskets. Normally, I wouldn’t mention gaskets, but these are no ordinary gaskets. They are super thick and made to reduce heat transfer from the engine to the supercharger. They are around $200 including the gaskets for the surge tanks.

Finally, I ordered a mail order tune from VRP. This is normally $450 and $35 each time you change something on the car and need an updated file. Eventually, a full dyno tune will be the best route but for these light modifications, this will more than do.

My goal is to spend no more than $5,000 on performance mods and with VRP offering discounts to myself and all my YouTube subscribers, I think this is more than possible. Stay tuned for phase 2 where I will be getting into adding boost via a smaller supercharger pulley, and maybe another burn out or two for good measure.