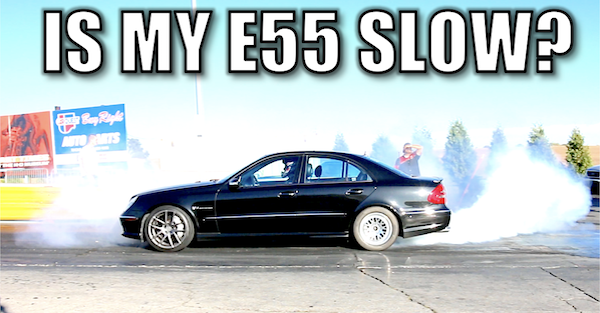 Some people get performance numbers from a dyno, some just race their car at the track, and I do both. In the latest video on my 2003 Mercedes-Benz E55 AMG, I find myself in the middle of cheese country at Great Lakes Dragaway, in Union Grove Wisconsin. It?s an old school track I?ve been going to for years, and unlike my 9 second Trans Am, they can?t kick me out for not having a roll cage in the E55. My times made sure of that.

The E55 was fresh off a dyno session a week earlier where it put down 460 horsepower and 490 lb. ft of torque to the tires. It was about 80 degrees and sunny at the track and I thought the car was good for an 11.8 in the quarter miles. These cars from the factory run about a 12.5 so I figured I’d be conservative since I had headers, a tune and sticky tires. Man, I was so wrong.

On my first run the car went 12.5 at 112 mph and I immediately knew something was off. A fellow E55 owner flagged me down and told me the bad news. The DA that day was 1900 and if you know these cars, they don?t do well with hot humid air. DA stands for density altitude, the higher the number the slower the car will go.

The E55 is factory supercharged and its Achilles heel is the tiny intercooler they placed in between the hot engine and the hot supercharger. If the temperature of the air going into the motor gets too hot the computer pulls ignition timing and you can say goodbye to running fast.
Aside from running in the 11s, I was on a mission to perform 3 tests in this video. The first test was to simply run the car as it came off the dyno but with a pair of Mickey Thomspon drag radials in the back. Next, I would upload an engine computer tune by a company called Race IQ to see if that made an improvement over the cars existing ecu tune by a company called Eurocharged. The last test before I just concentrated on going fast, was putting a ton of ice in my ice tank under the hood.

The test between the tunes didn?t really work out as the day just got hotter and so did my engine. The ice test on the other hand, was awesome. I added a few solo cups worth of ice and went for a pass. My intake air temperature immediately went down and my best time of the day was a 12.2 at 114 mph.

Overall I was pretty disappointed as I never reached my goal of an 11 second quarter mile time. Next up the car gets more boost, methanol injection and I?m definitely going to be watching the weather. Stay tuned, it’s 11s or bust.