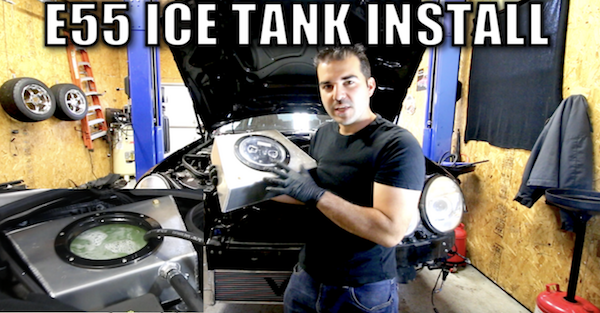 Some modifications to your car are satisfying almost immediately. This is one of those. In the latest video on my LegitStreetCars YouTube channel, I continue on with the cooling modifications. These mods are not to be confused with engine cooling, but rather the lowering of the intake air temperature via the car’s factory water to air intercooler system.

In the first part of the build, I installed a larger front mounted heat exchanger, and in this video we complete the system with a larger VRP Superflo coolant pump, and an awesome looking VRP Ice tank placed under the hood.  To be fair, its more of a coolant/water tank that feeds the coolant pump, but you can pack it full of ice at the race track to super cool that intercooler.

I start off with the tank that mounts in the same location as the factory cabin filter housing. This means the cabin filter needs to go. I still wanted some kind of air filtration so I installed a small filter and screen directly to the fire wall opening. With the the cabin filter housing and bracket out of the way, I could now mount the tank. At first, I really didn’t think it was going to work. The tank sat up high and I couldn’t close the hood. After about an hour of trimming the plastic bracket on the firewall that holds the new cabin filter, I was able to get the tank to sit low enough for hood closure.

Next up was mounting a massive VRP Superflo coolant pump. This goes behind the bumper on the right side next to the heat exchanger. I had to modify the factory pump’s bracket and use a self tapping bolt, but overall it was easy to install. I then proceeded to wire the pump directly to a key-on ignition source and found that the previous owner had already done that for me. He used a neat little product called Add-A-Circuit. It basically replaces a factory fuse with a fuse holder. You then just plug in the factory fuse and the fuse you want to add for your new circuit, and you’re done. No cutting, no splicing and best part is, it’s completely reversible.

With the pump, wiring and tank installs finished, I just needed to connect all the hoses and I was done. It took more than I expected to bleed all the air out of the system. I had to lower the heat exchanger and raise the back of the tank to get it completely filled with no air pockets. In the end, turning on the key started the pump right up, and the flow into the tank is just something you need to see for yourself. Hey, that’s what the video is for! Enjoy, and stay tuned for the next one where I tackle a cheap way to data log.