Last remaining Earnhardt in NASCAR cup series talks about what Dale Sr. meant to him 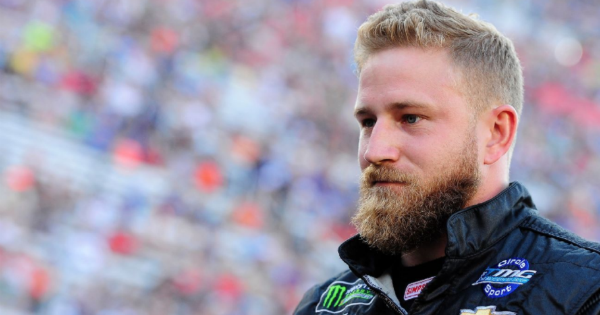 Like most kids growing up, Jeffrey Earnhardt had a super hero.

It wasn’t one out of a comic book — not Spiderman, or Superman, or Batman — but a real life super hero.

Jeffrey Earnhardt talked to Alt-Driver about the importance of keeping the Earnhardt name on the track, and keeping the legacy alive. It looked like that streak was in jeopardy when, late last year, he lost his ride with TMG. Without a new team,  a streak of 39-consecutive years of Earnhardts on the track would have ended. But he’s signed a deal with upstart StarCom Racing, so the streak lives.

And during that conversation, the subject turned to his NASCAR legend grandfather.

“He was my super hero,” Jeffrey Earnhardt said.  But he was also something else — the Intimidator, even off the track.

“My favorite thing about him was how everyone viewed him as the Intimidator and thought he wasn?t that way off the track, but he was,” he said. “He told me not to call  him Papa Dale and he refused answer to that because he said it made him feel old. He told me if I wanted him to answer, to call him Mr. Earnhardt.”

One thing for sure — when Jeffrey Earnhardt gets behind the wheel of the 00, he’ll have Mr. Earnhardt with him.

As far as the team goes, Jeffrey Earnhardt is pumped to get back on the track. He said, in an earlier press release, ?I am so appreciative of everyone at StarCom Racing and VRX for having confidence in me and making this a reality,” said Earnhardt in the release. ?There?s been an Earnhardt driving in the 500 for 39 years so to be able to keep that streak going for a 40th year means a lot to me and I?m sure a lot of Earnhardt fans are going to be happy to hear this news.?