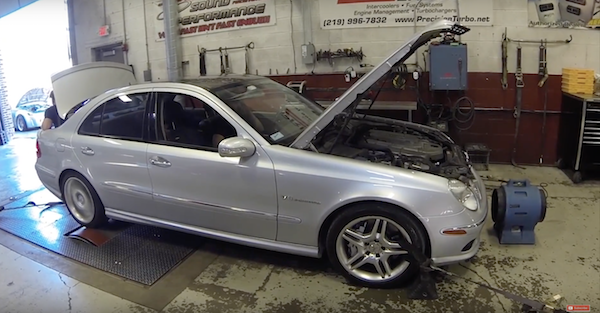 Cars and humans are very similar. We all age, wear out, break down and eventually die.  Unlike humans, cars are given performance data and specifications when born.  We know exactly what to expect from them because engineers, journalist and owners test the cars and release their results to the public.  One thing we never really think about is how long a car can maintain its performance. Surely, like us they wear out and things like horsepower and torque diminish.

I’ve always wondered this and when given the opportunity to test a thoroughly used Mercedes-Benz E55 AMG with a factory hand built supercharged 5.4 liter V8 and a crazy 402,000 miles, I jumped on it.  I found this car online at a local dealer who had it for sale. The carfax showed that it was a single owner car from California and it had been maintained at the same dealer since new. I spoke to the service writer at that dealer and found out it was still on its original engine and aside from a couple normal oil leak repairs for valve cover gaskets and things of that nature, it had never had a major overhaul.  This car was previously featured on my YouTube channel Legitstreetcars, and after making that video I realized it was the perfect candidate for a dyno test to see what difference to performance almost a half a million miles makes.

A good friend, Matt, from the YouTube channel Warped Perception had a bone stock 2006 E55 with only 69,000 miles, so it was the perfect car to set a baseline on the dyno. First up was the 2006, and after some issues with wheel spin, we put a couple guys in the trunk and went to town. After three runs, its average was 380whp and 447 ft lbs of torque. Pretty normal numbers considering the E55 comes with 469 crank horsepower and 516 ft lbs and there is about a 20% loss through the drivetrain. We then prepared the super high mileage E55 and I may or may not have had a panic attack thinking this thing was going to blow up, knowing I’d have to make a really awkward phone call to its owner at iCars Chicago. We strapped her down and went for it. I immediately could tell it wasn’t going to put out a good number.  The first run was a sad 327 whp and 391 ft lbs of torque. I was pretty shocked because I’ve driven quite a few E55s and this one felt just as fast as a new one. We let it cool down for 10 minutes and blasted it one more time. This time I could hear immediately the car had no supercharger and the car put down a depressing 250 whp.

After taking the car off the dyno to let it cool, I drove it home.  Immediately leaving Sound Performance where we had it dyno’d, the car felt totally normal. As it heated up again, the car was way down on power and I came to the conclusion the car’s intercooler coolant pump had failed.  This car uses a roots style supercharger that sits right on top of the engine.  If the coolant pump goes out, coolant can not be circulated through a front mounted heat exchanger and cannot cool the intake air.  This condition triggers a safety and the car’s computer is able to disengage a clutch located at the front of the supercharger, thus disabling the supercharger.

In the end, I was pretty bummed the car didn’t get a fair shake at the test. The good news is the owner of the 402k mile car wants a rematch.  He has given me the go to fix the car and not only strap it back down on the dyno, but to go head to head with the low mileage E55 in a race.

With a replaced pump who do you think will come out ahead?  The young buck who lives a pampered life of garage storage and leisurely drives on Sunday or the old war dog who has never backed down from a fight, and by fight I mean a really long commute to work.  Stay tuned to find out.