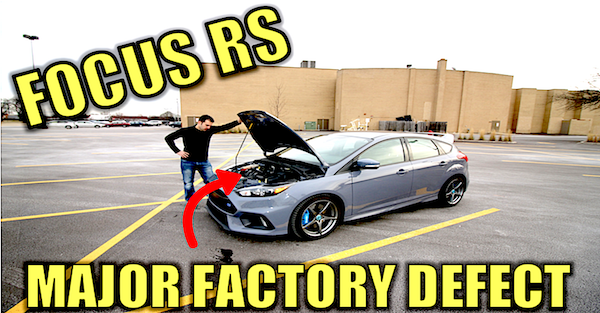 When the Ford Focus RS was released in 2016, people went nuts. A gorgeous hatchback with 350 horsepower, 350 lb-ft of torque, all-wheel-drive, torque vectoring and freaking drift mode. The little Focus was a real contender with cars like the Subaru WRX STI, and people began to justify the $40,000 price tag.

The RS has been out for almost two years now, and although the car has aged well, you can?t say the same for the 2.3 liter Ecoboost under the hood. Reports of coolant burning issues came out early on, but it wasn?t until this month that Ford finally admitted there is a real problem. In my latest video on the LegitStreetCar YouTube channel, I tell the story of a local Focus RS owner. For the purpose of the video I name him Franks Focus, and the issues he had with his RS are amazing.

Well, maybe amazing for us but he would use a different adjective to describe his experience with his first performance vehicle from Ford. Frank went 20,000 trouble free miles with the RS until one day he noticed the smell of coolant burning at cold startup. This went on for about 45 days, and he took it to the Ford dealer twice for the issue. They could not duplicate the problem and sent him away each time. Frank knew something was up because he used almost two gallons of coolant in just 3,000 miles. Then one day at cars and coffee the engine locked up. The car had sat in the parking lot for just two hours, and that was enough to completely fill a cylinder with coolant and caused it to hydro-lock.

In the video, I go over the engine block design of the Focus RS. It’s believed this may be the cause of many head gasket failures all around the world on these engines. The RS uses an open deck design meaning there isn?t any support at the top of the cylinders. Since the cylinders don?t attach to the block at the top, there is movement each time the cylinder fires. It?s possible that this movement is causing what?s called ?gasket scrubbing.? This is a condition where a gasket is rubbing on a metal surface and wearing thin. On Frank’s car, the head gasket was blown, and the cylinder head and block deck were warped.

The entire engine needed to be replaced, and it was fully covered by the manufacturer warranty. Out of warranty, this would have been an $8,000 repair. With Ford admitting there is an issue, RS owners are hopeful a permanent repair will be issued soon. Unfortunately for Ford, if this is the Block, this will cost them a lot of money.

If you have an RS, I advise not going crazy with performance modifications as Ford will be looking for reasons to deny a claim. Stay tuned for an update when Ford releases the official repair.