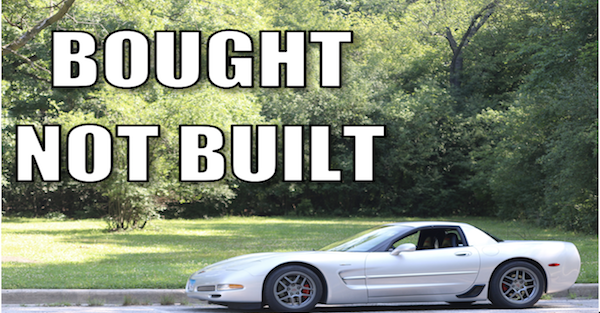 Some people have a lot more money than they do time and for those hard working, lucky few, sending a car to a speed shop for upgrades is the best option. In my latest video on the LegitStreetCars channel, we take a look at a 2001 Corvette Z06 that was sent out to Lingenfelter Performance Engineering with a check for $27,665 before its first oil change.

The original owner of this car sold it just 10 months into ownership at the end of 2001. This was likely due to the fact that GM upgraded the 2002 Z06 with a power increase from 385 HP and 380 lbs-ft of torque in 01 to 405 HP and 400 lbs-ft. The 2nd owner probably received a decent discount and didn’t waste any time making sure there wasn’t a 2002 on the road that could keep up.

At Lingenfelter, this car received a Stage 1 Twin Turbo kit including twin Garret water cooled ball bearing turbos, high flow intercoolers, custom exhaust manifold and all supporting mods like a fuel system and HD clutch. The engine was removed and rebuilt, replacing the factory hypereutectic pistons with forged slugs and forged connecting rods. They installed CNC ported heads and a GT2 turbo cam. All this was good for 550 crank horsepower and 550 lb-ft of torque. Since the Z06 only weighs 3,100lbs, this was one quick car, especially for 2002.

The owner didn’t enjoy his new found power as much as he’d have liked since it took 12 years for him to travel 4,000 miles. His next stop, in 2014, was Vengeance Racing in Georgia where he accumulated a bill for almost $32,000. About half of that went to a very controversial mod: An automatic transmission. All Z06 Corvettes came with six speed manuals for good reason. This is a handling road car and the automatics, especially back then, would not do this car justice. Vengeance installed an RPM level 10 with a Precision Industries torque converter and the swap looks totally factory. With the rest of his cash, Vengeance improved the performance quite a bit. They added a better fuel system, methanol injection by Alky Control and a 3 bar map sensor allowing for them to raise the boost to 13 psi. They also performed some normal maintenance, upgraded the trunnions on the rocker arms, installed a level 4 differential and axles then dyno tuned the whole package. These mods put this car at 640 horsepower and 644 lbs ft of torque at the wheels! The owner who had the mods done was able to run a 10.4@135 mph using an 18 inch Mickey Thompson drag radial.

After all this, the car was sold earlier this year for $30,000 with just 8900 miles on it. Considering that’s what stock low mileage Z06s sell for further proves that even the most professionally done mods do basically nothing for resale value.

I drove this car around for a couple hours in Chicago and was surprisingly given some room on the highway to open her up. All I can say is that this thing screams and I forgive the guy for putting an auto in it. The power more than makes up for any losses in the transmission and it shifts spot on. With these sticky tires out back, traction is pretty good. When you punch it, you get that weird feeling in your gut like when you take off on a roller coaster. It’s just amazing. The power never stops and it’s tempting to just top out every time you lay into it.

If you’re in the market for a performance car it’s worth looking at cars that are modified if that’s your plan anyways. Most like to buy stock cars and do all the work themselves and there’s a great argument for making a car your own. I have built a few of my own cars and the joy and feeling of achievement is great. The only part that isn’t so great is adding up how much I’ve dumped into my car and what it’s worth after all that work. If you think buying a modded car is for you, then here are some things to look out for.

Only buy a car that’s heavily modified like this one if it comes with receipts from a reputable shop. Like I said, I’ve built my own cars but in no way expect anyone to take my word for what has been done to the car and that it hasn’t been “abused.” Buying a professionally modded car won’t guarantee it hasn’t been abused, but it’s a good start knowing that the work was done right.

Pay the inspection fee and bring your future modded car to a local speed shop. Don’t go to the same shop that did the work, but a 3rd party can check compression, lift the car up and check for leaks and worn out suspension. Another great idea is to get it inspected at a body shop. They are pros at finding frame damage from hacked up modifications.

Obviously, test drive any modified car you buy. Most will require you to bring cash if you expect to drive the car, so be prepared. Also, if all you can get is for the owner to drive the car for you, that’s better than nothing. Get on the highway, open it up and really test the car out. Don’t be shy because after you hand over the money it’s all yours. There’s never any warranty with this stuff.

Lastly, don’t buy a modded car sight unseen. You might get away with this on a three year old Toyota Camry from a dealer because, what can you really do to a Camry? But buying a car from Ebay, for example, can be tricky because an amazing camera can make anything look good. I almost bought an Old Cadillac sight unseen and, before I pulled the trigger, I decided to take the gamble and drive a few hours to see it. I’m so glad I did as, while it appeared 100% mint, it was far from it. After seeing holes in the floor, leaks from everything and interior that smelled like a cat litter box, I was glad I made the trip.

Be patient and a car like this Z06 will come up. Speaking of which, this one is actually up for sale here!

Related: This Corvette could make anyone fall in love with American cars