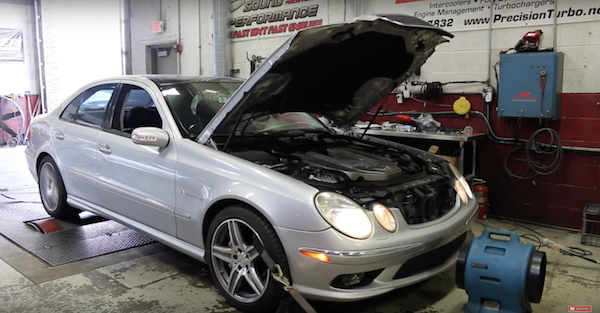 The car has an air to water intercooler system for the factory supercharger. When the system’s electric coolant pump stops working, the intake air temperature skyrockets. The car’s computer is actually able to shut off the electronically controlled supercharger clutch therefore not allowing it to make boost and thus saving the engine.

This time, I was out for revenge as I had just installed a brand new Bosch coolant pump and bled the system. If you follow my YouTube Channel LegitStreetCars, you’d know the dealership quoted me almost $800 for the same exact pump. Doing the work myself I spent $110 out the door!

I arrived back at Sound Performance on a 90 degree day with high Chicago humidity and it was game on. First pull, the car made 366 whp and 372 wtq and, although it seemed like a decent run, the torque was way down. Before the 2nd pull we gave it about a 12 minute cool down and the car gave us 362 whp and 416 wtq, not too bad. For the 3rd and final run we decided to add some weight in the rear as we suspected some tire spin on the dyno. One of the guys at Sound jumped in the back and we recorded our best overall pull of the day. This time, the car made 362 whp but a whooping 449 wtq.

To fully understand these numbers, you have to compare them to the factory rating which is tested at the engine and not the wheels. Mercedes claimed the 03-06 E55 to make 469 horsepower and 516 lb-ft of torque. Considering an automatic rear wheel drive car is expected to lose about 18% through the drive-train, we can come up with crank figures by dividing chassis dyno numbers by .82.

After 402,000 miles this car is making 441 crank horsepower and 547 lb-ft of torque. Lots of things effect dyno numbers mainly the type of dyno and if the numbers are corrected for weather. This was on Mustang dyno which is a loaded dyno and can read lower than inertia type dynos and it’s weather correction program was not on which definitely effected the numbers negatively.

In the end, a dyno is a tuning tool and regardless of all the different variables, this test proved that this car is completely healthy and hasn’t lost much power if any at all. The torque numbers being higher than factory is pretty typical as it has been recorded many times that Mercedes underrated these single over-head cam supercharged 5.4 liter engines.

For those wondering, this is the original engine as this was a one owner car and was maintained at one dealer. I pulled all the records and inspected the car myself and it shows no signs of ever having the engine opened up.

Each E55 engine was hand built with a small plaque right on the supercharger showing the signature of the engine builder. Thanks Volker Haag, you made one hell of an engine.