These 2 Friends Are Going on a 6,000-Mile Tractor Trek to Alaska and Back for a Fantastic Cause 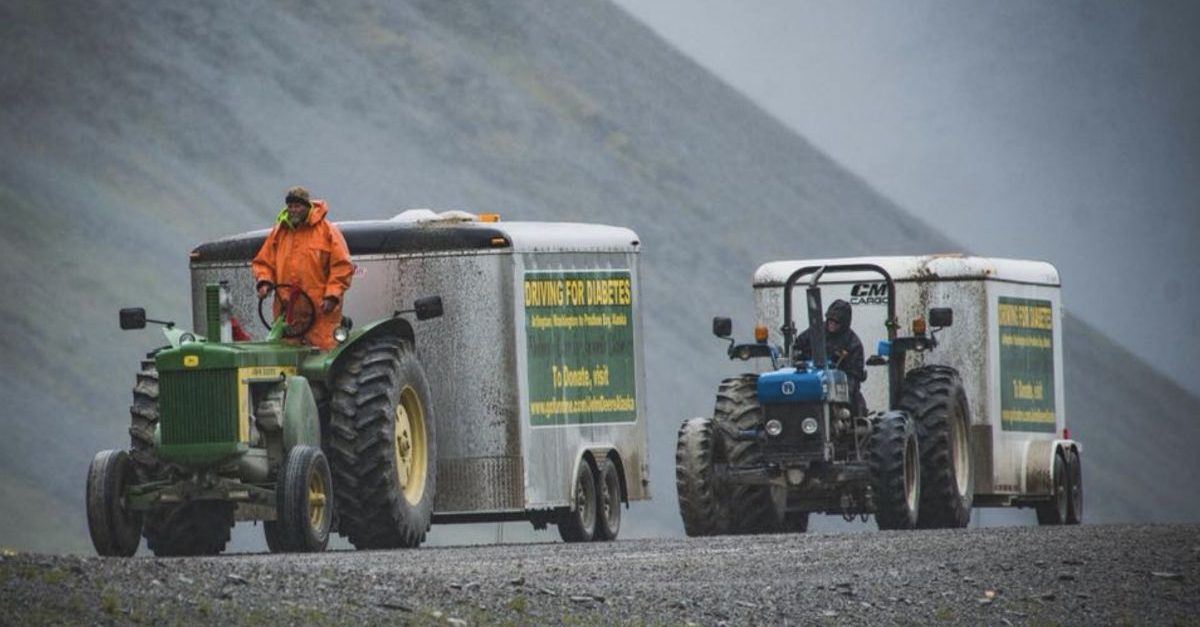 Tractor Tuesday is a weekly article series that focuses on all things tractors, from the inspiring to the cringeworthy to the downright badass.

They say that when life gives you lemons, make lemonade. Jeff Newell lives by a slightly different mantra: when life gives you diabetes, drive 6,000 miles round trip from Washington to Alaska in a John Deere tractor to raise money for diabetes research.

Ok, so that doesn’t really roll off the tongue, but it’s exactly what the local business owner from Arlington, Washington plans on doing. And as of early August, he’s halfway done.

We made it to Prudhoe Bay Alaska. After 3000 miles at 15 MPH through 90 degree temperatures , rain, freezing rain, and lots of road miles, we have reached our goal. I don't think this has ever been done before a 1956 John Deere Tractor and a Ford Tractor we are making history . pic.twitter.com/E929DacQ3Y

Joined by his friend, Ron Wachholtz, Newell is driving from Arlington to Prudhoe Bay in a 1956 John Deere Tractor (Wachholtz is making the trip in his own Ford tractor) to raise money for the American Diabetes Association and has a goal of raising $500,000.

Having lived with Type 1 diabetes since he was 11, Newell knows all too well the toll that diabetes takes on those who suffer from it.

?I see a lot of people grow up with diabetes, and they don?t do so well with it,? Newell said, according to Herald Net. ?For some reason, it affects everyone different.?

?Some people hear that you?ve got diabetes and look at you sideways, but it doesn?t have to be like that. You can live a normal life. There are diabetic athletes and actresses or actors. You get good days, you get bad days.?

Newell left Arlington on July 11, arriving in Prudhoe Bay with Wachholtz on August 4, and he anticipates it will take another four weeks or so for them to make it back to Arlington. Chugging along at speeds of around 16 MPH, it’s a marathon and not a sprint.

As it turns out though, this isn’t the first time that Newell has made the trek to Prudhoe Bay and back.

?I?ve done it before on a motorcycle, pretty much the same route,? he said. ?We?re just making it happen this time on tractors.?

Small village we passed through Moricetown, We went about 300 yards off the road, and found this little farm bought some just picked strawberries, new baby potatoes just duged and romain lettuce, for a little campground dinner, DELISH pic.twitter.com/L54i9mfmTW

The ’56 John Deere that Newell is making the journey on is actually one he bought at an auction. It took him nine months to completely rebuild it and now it runs, if you can believe it, almost as good as new.

?I got the most wore-out one I could find,? he said. ?I tore it all down to nothing, rebuilt it. It?s basically a new tractor.?

Early Morning tractor ride. Heading North to Prince George, we left camp at 5 am the sun is raising, and it is going to be another beautiful day here in Northern BC pic.twitter.com/QkX6LQxA8L

Behind their tractors, both Newell and Wachholtz are towing a good deal of camping supplies, which include motorcycles for any side trips they need to make. With a route consisting of a good deal of back roads, the friends will need as many supplies as they can get.

?Most of us live pretty fast our whole lives,? Newell said. ?I?ve done that a lot. You don?t notice all that?s around you.?

Newell definitely has a point there. And at the slow and steady clip that he’s moving at, he’s bound to notice a whole lot in the next few weeks.

Watch: How to Get Your Truck out of a Frozen River