This Raptor vs Raptor test is for the ultimate stamp of approval: Ownership 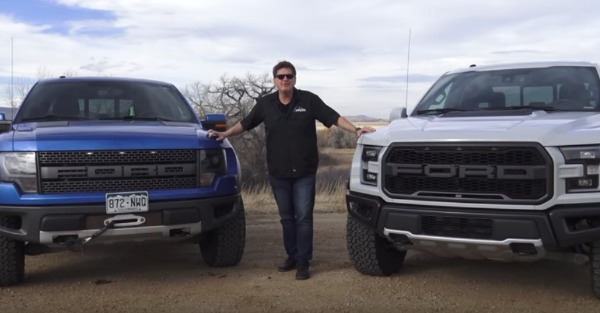 We have already seen these trucks pitted against each other in a drag race (Spoiler: The V6 won), but no one is buying a Raptor for its straight line performance.

The 2017 Raptor ditched its predecessor’s old reliable V8 for an Ecoboost V6. Ford fans were not happy about it either. Regardless, Ford seems determined to try to do more with fewer cylinders. The newer, V6 Raptor  is an improvement over the old version with around 40 more hp, but it hadn’t had many chances to show what it can do.

After going through all of the specifics on both trucks, they do a bit of off road driving to make sure it all translates to real life. At the end of the test, these guys want to give the winner the biggest stamp of approval possible. That is why, after admitting the newer Raptor is better in almost every single way, he cannot bring himself to trade in his first generation’s classic V8. We’re sure many other Raptor owners find themselves thinking the same thing.

Related: This drag race between the new and old Ford Raptor ends the V8 vs Ecoboost V6 debate