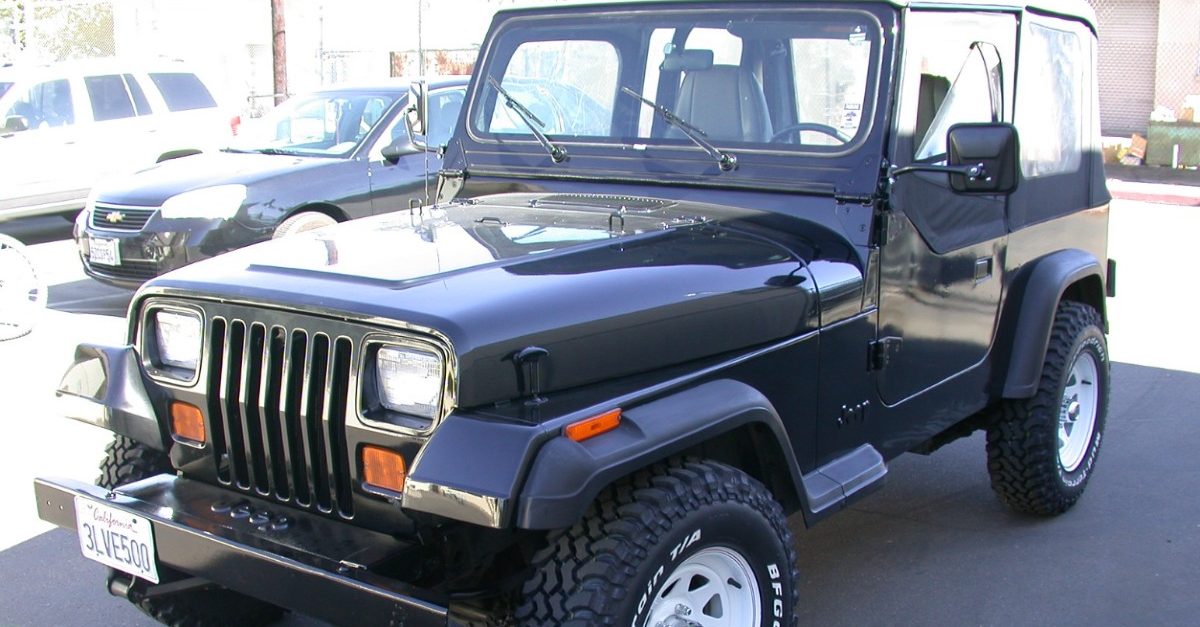 Ah, the 1995 Jeep Wrangler. The last model year of the first-generation Wrangler, more commonly known as the YJ. Chrysler stepped in and first introduced it in 1986 as the successor to the Jeep CJ lineup, making it the first generation of Jeep Wrangler four-wheel drive small off-road vehicles. At the time, the YJ was definitely one of the more controversial models for many Jeep enthusiasts, but it was still incredibly different from any off-road vehicle that Dodge, Toyota, Ford, or Chevrolet was offering.

More importantly, the YJ Wrangler would be pivotal in defining a brand that is still extremely respected to this day. Let’s take a look at this iconic off-roader!

First off, from a design standpoint, the Jeep YJ’s square headlights replaced the traditional circular headlights that people were used to seeing. It’s one of the easiest ways to tell a YJ apart from the rest. Now, while people had mixed emotions about the headlight change, it was essentially just a slightly improved CJ with a different body at first. Changes for this generation included a slightly lower ground clearance with a wider track, while broader U-joints, wider leaf springs, and sway bars were added for improved handling, along with anti-roll bars for safety.

This lineup did have its issues during the earlier stages, but many improvements were added throughout the years of the YJ that paved a way for the Wrangler models long term. By 1995, it developed into arguably the best all-around off-road capable, 4-wheel drive SUV on the market. A multitude of trims were available for these models. The Jeep wrangler SE was the base model, but as it developed, Jeep eventually offered the Laredo, Sahara, Renegade, and Rio Grande packages with plenty of options for exterior colors. There was also the YJ Wrangler Islander package, which came with such automotive upgrades as body-color wheel flares and side steps, a center console with cupholders, and optional five-spoke alloy wheels.

For later models, they kept the signature two-door body style and gave you a choice between the soft top and the hard top. Certain models even came outfitted with leather seats. Jeep also offered a larger selection of drivetrain options during this generation. They introduced the famous 4.0 inline V6 engine, which Jeep enthusiasts fell in love with over the years, and a 5-speed manual transmission to put the power to the ground.

Read More: How Many Toy Cars Will It Take to Pull a Jeep Grand Cherokee?

Real Jeep enthusiasts know that the draw to the Wranglers had nothing to do with the MPG, the comfort, or the overall practicality of the vehicle. Folks loved these things, because of their all-around reliability and heavy-duty feel. It felt natural to be taking the YJ into a long stretch of trails, because it was perfectly capable of handling anything you could throw at it.

It was a true off-road driver’s vehicle, and you could tell the second you laid your hands on that steering wheel. That’s always been the case with Jeep, and its fans continue to embrace the vehicle’s history. Aftermarket support has also always been plentiful for these Wranglers when you wanted to take your Jeep experience to the next level. Throw on a lift kit, some bigger tires, new fenders, and winch, and you’d be surprised how much terrain this thing could tackle. You popped a tire along the way? No need to worry, because you’ve got a full-sized spare tire on the back ready for you. Although they may be a little more rare now, you can still find used Jeep Wrangler YJs in good condition today that you could turn into an awesome trail vehicle. It’s a little older, but the price drops in today’s market make it a tempting and affordable off-road toy to purchase.

Let’s get real, the YJ was far from perfect at the time, but it served as a massive stepping stone for the Wrangler lineup as a whole. The 1995 model was particularly special, because it was the last year the YJ was available. Jeep created it, innovated it for nearly 10 years, then took it to the next level with the next-generation TJ. It’s hard not to respect the history of the YJ. It truly did so much for the identity of Jeep and the Wrangler brand, which is still in production today over 30 years later. Let’s also take a moment to thank Jeep for ditching the square headlights.