Guy tried to off road his new pickup over a frozen pond, and now faces all kinds of heartache 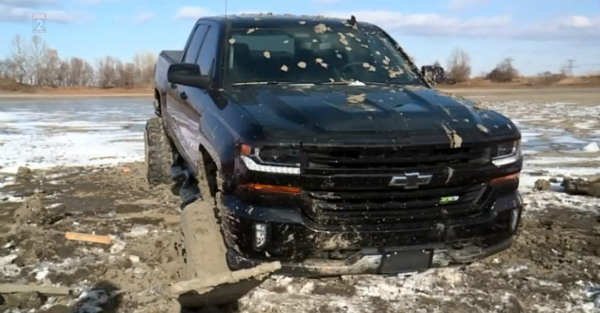 An Illinois man recently found out that illegal off-roading isn’t his forte. A truck owner sat shotgun while a buddy drove his truck into what he thought was a frozen field, but the two found themselves above a frozen pond, according to FOX2 St. Louis.

The two nearly escaped the permafrost mess, but eventually  the wheels of the new Chevy Silverado became stuck in the frozen surface beneath them. To add insult to injury, in an attempt to free the truck, it’s owner rented a backhoe only to get it stuck as well.

RELATED: Watch a man make an unbelievable recovery after his Subaru starts floating away

The property is owned by Chain of Rocks Recreation Corp. and is used for water skiing practice. Come spring-time the truck will be under 6-7 feet of water if they don’t manage to remove it sooner.

“When the lake goes dry in the winter, there?s a lot of temptation for guys to think they can just come out here and go four-wheeling,” Austin Opp of Chain of Rocks Recreation Corp. said.

“This is the worst I?ve ever seen out here,” added Opp. “Nobody?s usually dumb enough to try to go out on the lake and he did.”

The property owners want the vehicles removed as soon as possible, but that isn’t their biggest concern. A few years ago there were 13 vehicles that were impounded in a single day in an ongoing illegal four-wheeling problem.

No one has yet attempted to remove the vehicles. Given what has happened already, why would anyone want to try?