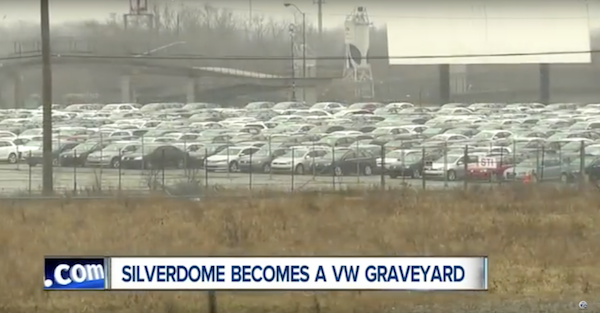 The scandal known as ?Dieselgate? is far from over. Volkswagen was forced to recall 590,000 TDI powered VWs in the U.S. alone, and many of them are just sitting around waiting to be fixed. This all started in September of 2015 when it was discovered that TDI models built from 2009-2015 had some trick programming that would allow the cars to pass emissions only in a controlled testing environment. When driven on the road normally, the cars would emit 40 times the acceptable level of NOx.

Currently, thousands of these cars are being stored at the former Detroit Lions Stadium parking lot in Pontiac, Michigan. According to Louisville-based WDRB, over 60 of these cars have been reported missing with many of them believed to be sold with fake titles.

WDRB reported some of these cars were tied to a dealership located in Radcliff, Kentucky. The dealership claims they bought the cars at an Auction house in Indiana and knew nothing of their tainted history. At least 15 cars were sold to unsuspecting buyers with phony Michigan titles.

According to a spokesperson from the Indiana State Police, it was Volkswagen who first noticed something odd with some of their recalled fleet. The spokesperson had this to say to WDRB:

“Volkswagen was keeping track of all these vehicles they were purchasing back or buying back…When these VIN numbers starting showing up again in their system, that?s when the red flags started flying up.”

Since VW?s alert, twelve more cars were found and recovered at that same Indiana auction house. Nine more were picked up right from the dealership in Radcliff.

Volkswagen has started to roll out repairs for some of the newer cheating TDI?s, but it?s a slow process. The repairs include software updates, new diesel-particulate filter, diesel-oxidation catalyst, and selective ­catalytic-reduction converter. They are also increasing the warranty on the emission systems to the greater of either 11 years or 162,000 miles from new, or five years or 60,000 miles from the date of the recall service.