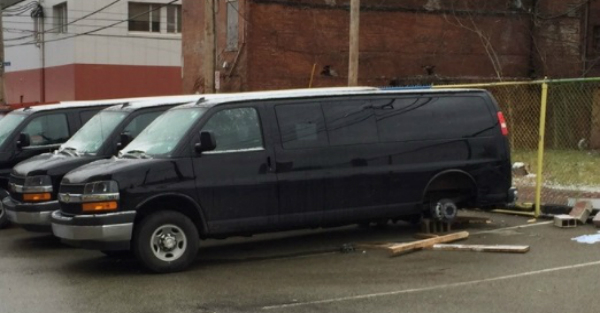 Sometimes criminals pay a hefty price for the crimes they commit. Some pay the ultimate price.

A man was found dead in Pittsburgh after an apparent theft gone wrong. Police found the man trapped beneath a van after authorities suspect he tried to steal the wheels off of it, according to WCVB-TV.

Pittsburgh police responded to a call of a fatal accident after a maintenance man found the body upon arriving to work, WCVB reported

RELATED: A car thief got way more than he bargained for when he stole an old Accord

A statement released by the city’s Public Safety Department said: According to the investigation, it is believed the male victim was attempting to steal the wheels from a van when the vehicle fell on top of him.

Amargie Davis, director of Community Empowerment Association, the organization that owns the van, said they’re saddened to learn someone was “that desperate” to steal the wheels, according to WTAE-TV.

“It’s really hard for us to deal with this, that somebody from our community was that desperate to take the tires and now his life is gone,” Davis said.

“It’s just a lot to think about, you know?” added Davis. “This person lost their life like that.”

The body of the man has yet to be identified. Police are continuing the ongoing investigation.