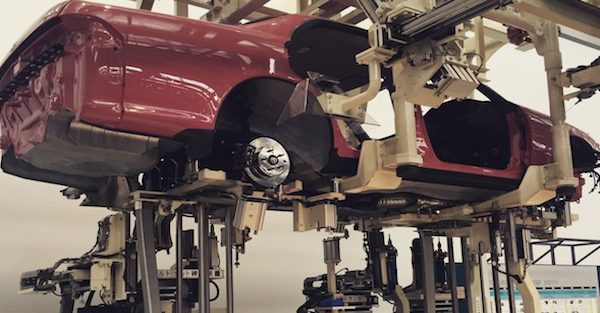 The great state of Alabama just scored big league with Toyota and Mazda announcing they will build a massive $1.6 billion joint-venture plant in Huntsville.

The decision to build in Alabama was a no-brainer for Toyota as it already has an engine plant in there only 14 miles away from the new site. In a statement to CNBC.com, Thomas Klier, senior economist at the Federal Reserve Bank of Chicago said:

“This plant is going to be in the center of auto alley.” “It’s a very sensible location, Toyota has an engine plant in Huntsville and two other facilities nearby in Mississippi, so this makes sense.”

The South has been the destination of choice for automakers recently as its low-cost labor and friendly business environment is very enticing. Alabama offered $370 million in tax abatements and investment rebates, but local incentives have not been finalized. It?s been reported Toyota and Mazda are asking for at least $1 billion in total. Considering the amount of spin-off business associated with a large auto manufacturing plant, and that Alabama spent an estimated $250 million to convince Mercedes to build there two decades ago, there?s a good chance the companies will receive most of what they?re asking for.

The plant will employee 4,000 people and produce 300,000 vehicles per year which could make Alabama the 4th biggest state when it comes to auto manufacturing. Currently, they produce about 9% of all vehicles in the states, and to put that into perspective, Michigan produces about 19% of the vehicles we drive.

President Trump, who has been tough on foreign companies building elsewhere and selling in the states said this:

?Toyota & Mazda to build a new $1.6B plant here in the U.S.A. and create 4K new American jobs. A great investment in American manufacturing!?

Mazda plans to build a new small SUV at the new plant, and Toyota said it would be building the popular Corolla there. They expect production to begin in 2021.