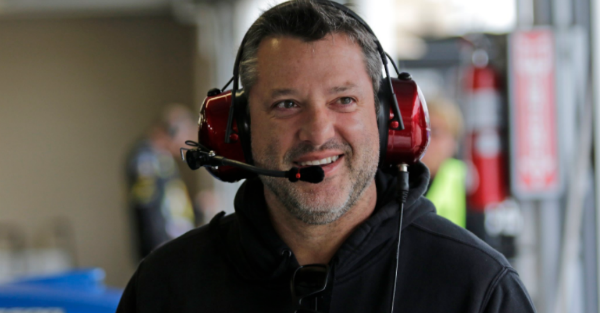 Thanksgiving is a day to give thanks for all the important people in your life and retired NASCAR driver Tony Stewart used the occasion to show his devotion to the most important person in his life.

On November 23rd, the 46-year-old Stewart shared a picture on Twitter of a huge diamond ring on the hand of his girlfriend, Pennelope Jimenez. There was also a caption announcing she said yes to Stewart’s marriage proposal.

Stewart retired from full-time NASCAR competition following the 2016 season. He won 3 championships and 49 races during his career in the Cup Series. Stewart also has an IndyCar championship on his resume.

Put a ring on it!

Currently, Stewart is co-owner of Stewart-Haas Racing, which fields the No. 4, No. 41, No. 14, and No. 10 Ford Fusion race cars in the Cup Series. Of those cars, only the No. 4 driven by Kevin Harvick qualified for Championship 4 race at Homestead, but Kurt Busch did pilot the No. 41 car to a Daytona 500 victory earlier in the year.

Despite his retirement, Stewart still makes regular appearances at the race track, along with Jimenez. In his earlier years, Stewart claimed he would never get married and would instead enjoy the bachelor life forever, but Stewart has made a number of changes since retiring. Perhaps, most notably, Stewart has taken up cycling and looks to have shed a substantial amount of weight.

While Stewart and Jimenez haven’t shared a date for the wedding, a number of drivers have taken to Twitter to congratulate the couple on their engagement.