A single-car crash kills a mother and her 3 children, but now, the horrible truth comes out 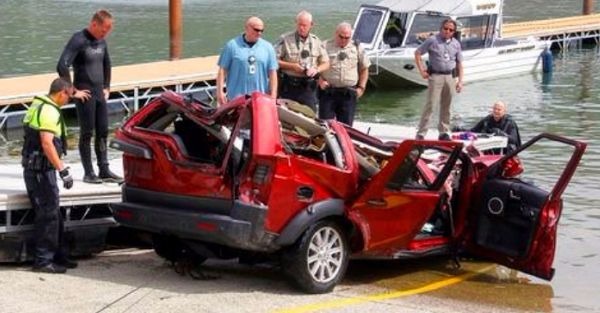 When Noel Bankhead drove off a cliff last year killing her three children, authorities in Idaho didn’t know if it happened as result of a mechanical issue, medical issue, or a deliberate act.

Now we have an answer.

The Ada County Coroner’s office has now ruled that all four deaths, which happened on June 2, 2016, were the result of a triple-homicide suicide, according to the New York Daily News.

According to witnesses, the 40-year-old Bankhead was driving on a state highway, when her vehicle slowed, turned towards the cliff, and then accelerated, according to Inside Edition.

Her SUV dropped approximately 50 feet before landing in Lucky Peak Lake, where it sank 40 feet to the bottom. Drowning associated with blunt force trauma was ruled the cause of death for all four passengers.

After more than a year of investigating, authorities didn’t find anything wrong mechanically with her Land Rover and learned she wasn’t taking any type of medication. This information, along with witness statement and lack of skid marks, led authorities to conclude that Bankhead acted deliberately.

At the time of event, her two girls were 6 and 13 years old, respectively, while the boy was 10 years old. They were described as active, curious, and interested in a variety of hobbies.

Bankhead reportedly went through a divorce about two years prior to this incident, according to Fox News.

She had worked as a paralegal and legal secretary for more than 20 years.

Mom intentionally drove off 50ft cliff into a reservoir killing herself and her three children aged 13, 11 and 8 https://t.co/vxudYBHPPK