Driving in New York could get even more expensive soon 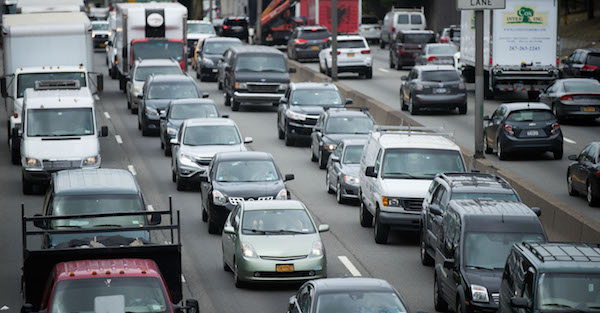 Drew Angerer/Getty Images
NEW YORK, NY - JULY 01: Traffic crawls on the Brooklyn-Queens Expressway (I-278), July 1, 2016 in the Brooklyn borough of New York City. Officials from the American Automobile Association (AAA) are predicting 44 million people will travel by roads, airports, buses, and train this holiday weekend. Gas prices for the July 4th weekend are the lowest they've been in 11 years. (Photo by Drew Angerer/Getty Images)

Driving in New York is a major a hassle, but a new proposal from New York Governor Andrew Cuomo is aiming to fix things… at a cost.

The proposal would charge drivers $11.52 to drive in congested areas of Manhattan, according to a report from Bloomberg. The plan is designed to decrease the amount of traffic while increasing revenue.

A pricing zone would be established, and drivers entering that zone from 6 a.m. to 8 p.m. would have to pay a daily fee of $11.52. Trucks would be charged $25.34, and Car Scoops believes that would only be for larger trucks and not regular pickup trucks.

The fee for Uber and Lyft drivers would be $2 to $5 per ride.

Related: Hero state trooper risked his life to save others from a drunk driver

“Our subway system is in a state of cardiac arrest,” Rechler said. “We have to do open heart surgery.”

The proposal is expected to generate $810 million and reduce traffic by 13 percent. It also expects the speed of cars would increase by nine percent. The fees would begin in 2020.

Being charged to drive through the city would be a burden, but if it really decreased traffic that much, it might be worth it for New York City drivers. And if the revenue improved the city transit, that would be be an added bonus.

It will be intriguing to see how New York drivers reacted to the proposal, but it could be very beneficial.