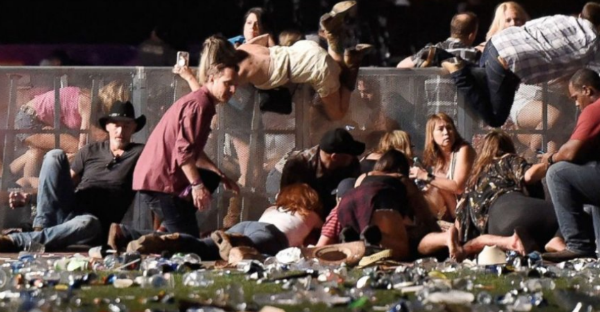 Heart felt condolences and prayers continue to flood in as officials sort through the late-night carnage in Las Vegas during which a gunman opened fire on an outdoor crowd enjoying an outdoor country music festival. The death toll has risen to at least 58, with more than 500 injured.

The Associated Press has called this the worst mass shooting in modern American times.

NASCAR, through its official website, issued a statement this afternoon:

Our thoughts are with those affected by the tragic shooting in Las Vegas, and we keep all those impacted in our hearts.

As the day has gone on, other drivers have followed suit.

Absolutely heartbroken to wake up to this. Praying for my hometown & those affected by this atrocity. Stay strong LV. I love you.

Waking up to this news from Las Vegas is sickening… Praying for everyone involved. Can't believe these sort of things happen.

This is very sad, what is happening with the world? Together strong. #PrayForVegas #PrayForTheWorld

In disbelief over Vegas shooting. My heart and thoughts are with the injured and the families who are dealing with unimaginable loss.

Waking up in tears over the news from Las Vegas. Praying for everybody involved, absolutely sickening. Unbelievable 🙏🏽

Steve O’Donnell, a NASCAR executive, said on SIRUS XM Radio that all NASCAR personnel who had been in Las Vegas during Saturday’s truck race were reported safe, NBC Sports reported.

Authorities are still trying to figure out why the gunman, Stephen Paddock, 64, opened fire on the crowd before killing himself.