Highway Bridge Collapse in Italy Claims Lives of at Least 20 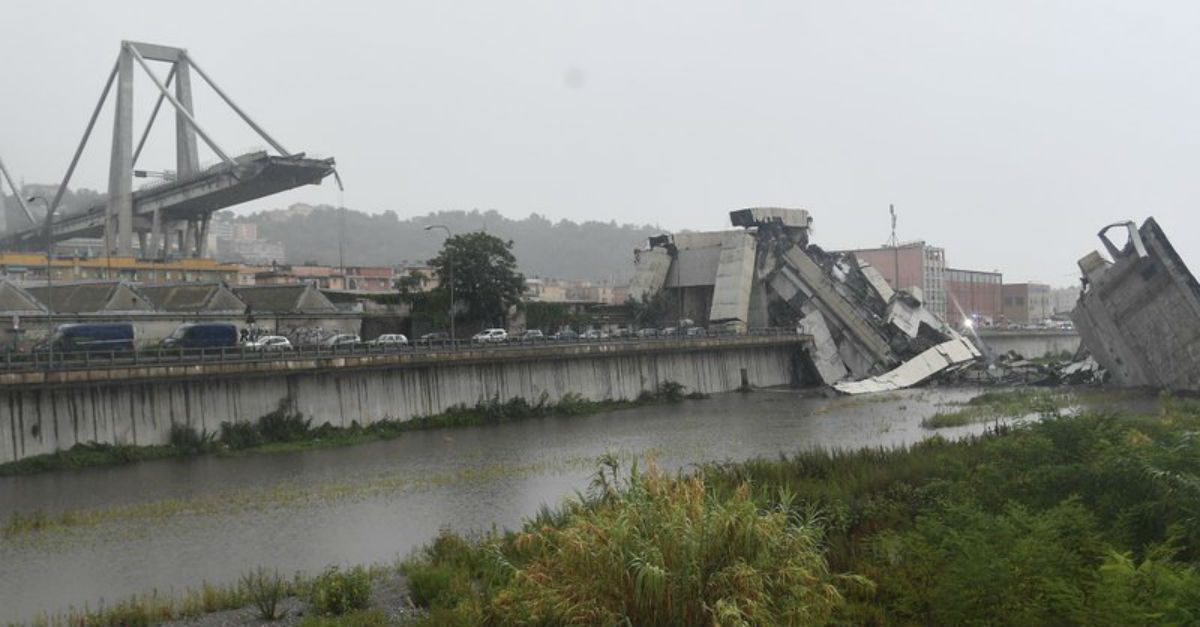 MILAN (AP) — A bridge on a main highway linking Italy with France collapsed Tuesday in the Italian port city of Genoa during a sudden, violent storm, sending vehicles plunging 45 meters (nearly 150 feet) into a heap of rubble. Italian officials said at least 20 people were killed, although some people were found alive in the debris.

A huge section of the Morandi Bridge fell at midday over an industrial zone, sending tons of twisted steel and concrete onto warehouses below. Photos from the Italian news agency ANSA showed a massive gap between two sections of the bridge.

#air view of the bridge collapse this morning 14th August in #Genoa Italy. Thunderstorms were in that area at the time and vehicles were reported on the bridge. Video; @farmaciaserrage #severeweather pic.twitter.com/sVeBq2kdx6

The head of Italy’s civil protection agency, Angelo Borrelli, said 30-35 cars and three heavy trucks were on the 80-meter (260-foot) section of the bridge that collapsed.

Hundreds of firefighters and emergency officials were searching for survivors in the rubble with heavy equipment. Firefighters said at least two people were pulled alive from vehicles and taken by helicopter to a hospital.

Video of the collapse captured a man screaming: “Oh, God! Oh, God!” Other images showed a green truck that had stopped just short of the gaping hole in the bridge and the tires of a tractor trailer in the rubble.

Read More: A Drawbridge Starts to Rise While a Family Attempts to Cross the Bridge

There was confusion over the exact death toll.

Borrelli said at a news conference in Rome that 20 people were killed and 13 injured. All the victims appeared to all have been in vehicles that plunged from the bridge, he said.

But an Italian transport official, Edoardo Rixi, had said 22 people were killed and 13 injured, and the governor of the Liguria region, Giovanni Toti, also said 22 were killed. Rixi said the death toll was expected to rise.

The collapse came on the eve of a major Italian summer holiday on Wednesday called Ferragosto, which marks the religious feast of the Assumption of Mary. It’s the high point of the Italian summer holiday season when most cities and business are closed and Italians head to the beaches or the mountains. That means traffic could have been heavier than usual on the Genoa highway.

The Morandi Bridge is a main thoroughfare connecting the A10 highway that goes toward France and the A7 highway that continues north toward Milan. Inaugurated in 1967, it is 45 meters (148 feet) high and just over a kilometer (.6 miles) long.

Borrelli said highway engineers were checking other parts of the bridge and that some areas were being evacuated as a precaution. He said they were still trying to figure out the reason for the collapse.

#BREAKING: Rescue workers in Genoa, Italy have confirmed that 10 vehicles are involved in a bridge collapse. (Video: @cclerici) pic.twitter.com/dVnxL0X2wr

“You can see there are very big portions of the bridge (that collapsed). We need to remove all of the rubble to ascertain that all of the people have been reached,” he said, adding that more than 280 rescue workers and dogs units were on the scene.

“Operations are ongoing to extract people imprisoned below parts of the bridge and twisted metal,” he said.

Borrelli said there was no construction going on at the time on the bridge.

Firefighters told The Associated Press they were worried about gas lines exploding in the area from the collapse.

“We are following minute by minute the situation,” Interior Minister Matteo Salvini said on Twitter.

Red Cross teams in #Italy are supporting search & rescue efforts and stand ready to help all those affected by the bridge collapse in #Genoa. pic.twitter.com/ryqZ8hBPPJ

The disaster occurred on a highway that connects Italy to France, and northern cities like Milan to the beaches of Liguria.

On Aug. 6, another major accident occurred on an Italian highway near the northern city of Bologna. A tanker truck carrying a highly flammable gas exploded after rear-ending a stopped truck and getting hit from behind. The accident killed one person, injured dozens and blew apart a section of a raised eight-lane highway.