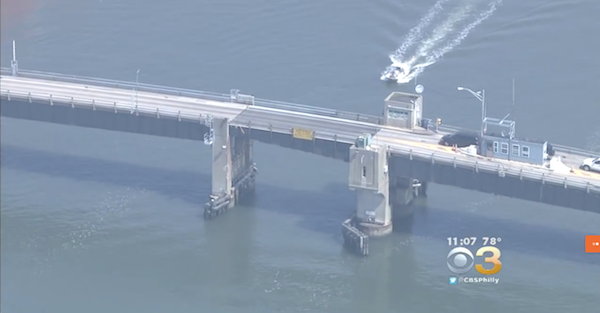 The Naphy family were traveling to Cape May in New Jersey for a vacation, but disaster nearly struck the family as they were crossing the Middle Thorofare Bridge.

Terence Naphy, his wife, his daughter and his daughter’s friend were in a Toyota RAV4 on the bridge when the drawbridge began to rise while the car was traveling across it. As the drawbridge was rising, Naphy hit the accelerator and jumped the gap to connect with the rest of the bridge.

The bridge was around 3-6 feet below, but no one in the car was seriously injured. The car, however, suffered about $10,000 worth of damage according to a local news report.

The Cape May County Bridge Commission is investigating the incident, and the drawbridge operator said he had a glare from the sun in his eyes and couldn’t see the car.

Naphy said he’d never drive over the bridge again, and it’s hard to blame him for feeling that way. Naphy isn’t sure whether the damage expenses will be paid for or not.