George H.W. Bush’s Presidential Funeral Train Will Be the First in Almost 50 Years 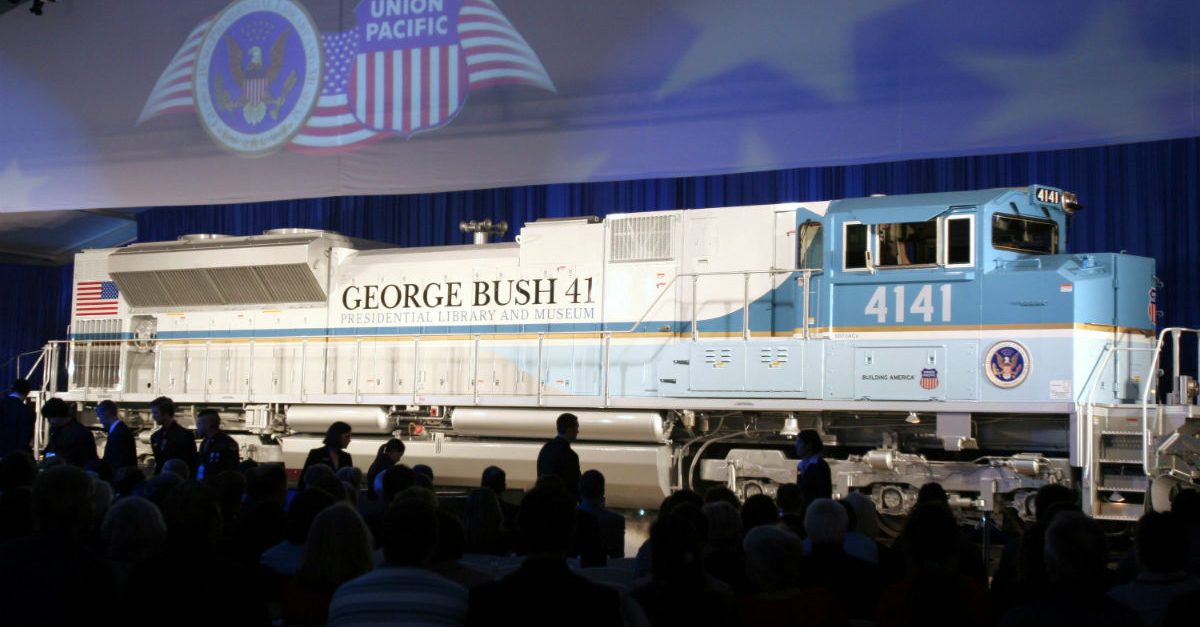 AUSTIN, Texas (AP) ? The locomotive was painted to resemble Air Force One, but George H.W. Bush joked that if it had been around during his presidency, he may have preferred to ride the rails rather than take to the skies.

?I might have left Air Force One behind,? Bush quipped during the 2005 unveiling of 4141, a blue and gray locomotive commissioned in honor of the 41st president and unveiled at Texas A&M University.

On Thursday, that same 4,300-horsepower machine will carry Bush?s casket, along with relatives and close friends, for around 70 miles (113 kilometers). The journey through five small Texas towns was expected to take about two and a half hours. It will deliver the casket from suburban Houston to College Station.

There, a motorcade will take Bush to his presidential library at the university, where he will be laid to rest at a private ceremony next to his wife, Barbara, who died in April, and his daughter Robin, who died at age 3 in 1953.

Read More: George H.W. Bush?s Last Words to Friends and Family Were Both Funny and Full of Love

It will be the eighth funeral train in U.S. history and the first since Dwight D. Eisenhower?s body traveled from the National Cathedral in Washington through seven states to his Kansas hometown of Abilene 49 years ago. Abraham Lincoln?s funeral train was the first, in 1865.

Robert F. Kennedy was never president, but he was running for the White House when he was assassinated in Los Angeles in 1968. His body was later transported to New York City for a funeral Mass and then taken by private train to Washington for burial at Arlington National Cemetery. Thousands of mourners lined the tracks for the 200-plus-mile journey.

Union Pacific originally commissioned the Bush locomotive for the opening of an exhibit at his presidential library titled ?Trains: Tracks of the Iron Horse.? It was one of the few times the company has painted a locomotive any color other than its traditional yellow. After a brief training session during 4141?s unveiling 13 years ago, Bush took the engineer?s seat and helped take the locomotive for a 2-mile excursion.

?We just rode on the railroads all the time, and I?ve never forgotten it,? Bush said at the time, recalling how he took trains, and often slept on them, during trips as a child with his family. He also called the locomotive ?the Air Force One of railroads.?

Bush, who died last week at his Houston home at age 94, was eulogized Wednesday at a funeral service at the National Cathedral. By evening, his casket was at St. Martin?s Episcopal Church in Houston.

The funeral train has been part of the official planning for his death for years, Bush spokesman Jim McGrath said.

Union Pacific was contacted by federal officials in early 2009 and asked, at Bush?s request, about providing a funeral train at some point, company spokesman Tom Lange said.

?We said, ?Of course and also we have this locomotive that we would want to have obviously be part of it,?? Lange said. He noted that trains were the mode of transportation that first carried Bush to his service as a naval aviator in World War II and back home again.

Eisenhower was the last president to travel by train regularly. A key reason was his wife, Mamie, who hated to fly. During the 1952 campaign, Eisenhower traveled more than 51,000 miles and made 252 stops. And while he often flew, his wife rode the train the whole time, Union Pacific said.

Still, when Bush beat Democrat Michael Dukakis and won the presidency in 1988, both candidates used trains to make some campaign stops. Bush also occasionally traveled by train in 1992, when he was defeated by Democrat Bill Clinton, including making Midwest stops aboard a train dubbed ?The Spirit of America.?

Read More: Aretha Franklin?s 1940 LaSalle Hearse Has Quite the History