Billy Monger lost both his legs in a crash on the track and months later, proves he’s a champ 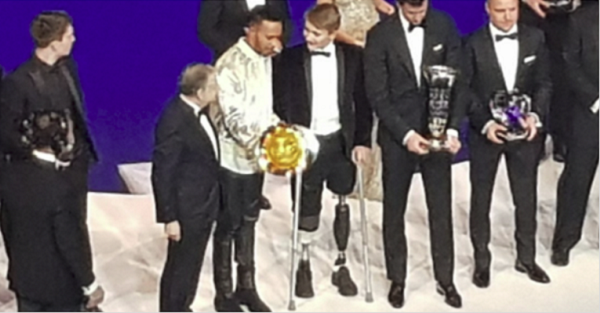 Warning: The video of the crash is hard to watch

The 2017 Formula 1 season has centered around Lewis Hamilton all year, but that was only until he got upstaged by a younger driver at the FIA Prize Giving gala, which was recently held in Paris.

Sure, Hamilton won 9 of 20 races, earned his fourth F1 championship, and set an all-time F1 record with 72 poles, but that pales in comparison to what 18-year-old Billy Monger accomplished in 2017.

After losing both legs following a crash at the Donnington circuit just eight months ago, Monger walked on stage to a thunderous applause on Friday using his prosthetic legs and crutches to accept the President’s Award. The award was presented to Monger by none other than FIA President Jean Todt and it’s given to those drivers who  “displayed courage, determination and sportsmanship but to also include those that have contributed greatly to the broader FIA community,” according to the Wide World of Sports.

A very special moment as @LewisHamilton collects the world championship trophy for the 4th time – and is joined on stage by @BillyMonger#F1 #FIAPrizeGiving pic.twitter.com/NrS9mMVJQv

Monger was back to racing only 11 weeks after his legs were amputated below the knee and he’s even petitioned a rule currently blocking disabled racers from getting behind the wheel of singe-seat Formula cars, according to The Sun.

A very successful JustGiving campaign was also started after Monger’s injuries and quickly became one of the most successful in the history of the site. In total, the campaign has helped raise 800,000 euros ($942,000 US dollars), which will be used for treatment, care, and physical therapy that’s needed to help him lead an active and complete life.

Still, the teenage driver’s biggest goal is to resume racing competitively. This point was driven home by a recent Tweet showing himself on a racing simulator, along with the caption, “Hopefully the real feeling will be coming soon!!”

Hopefully the real feeling will be coming soon!!🤙🏼 pic.twitter.com/gTc5OjFsOB

The crash itself was horrific ….

But in the aftermath, he didn’t lose his love of racing, or smile.