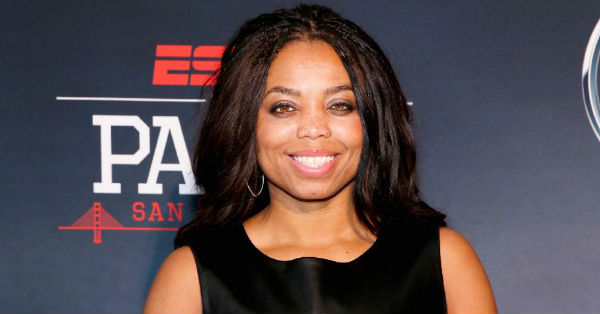 ESPN has had enough.

Jemele Hill, the outspoken anchor who was already reprimanded once for her use of Twitter, has now been suspended for two weeks after another violation of ESPN’s social media policy, several media outlets, including FanBuzz.com, reported.

Her latest transgression involved a series of tweets criticizing Dallas Cowboys owner Jerry Jones, and those can he read here.

The ESPN anchor apologized after she issued a tweet that likened President Trump to white supremacists, resulting in the White House demanding she be fired — and then ESPN publicly reprimanding her.

Clearly, she’s not holding her tongue.

She had this to say as NASCAR was swept up in the national anthem controversy, and team owners Richard Petty and Richard Childress threatened to fire any employee who kneeled.

But that Confederate flag is welcome anytime at NASCAR races #TheIrony https://t.co/rORcBM8liV

But that Confederate flag is welcome anytime at NASCAR races.

Well, sort of. NASCAR, in 2015, asked fans not to fly the Confederate Flag at the Coke 400, and even offered an American flag in exchange. But the efforts blew up in its face as fans rebelled. NASCAR CEO Brian France has said he wants the flag eliminated at race tracks, calling it an “insensitive symbol” that he finds offensive.

But that’s easier said than done since NASCAR started in the south, and the Confederate Flag is still an endearing symbol to some.

NASCAR has said it wants to move past all of the social controversy and stick to what’s happening on the track.