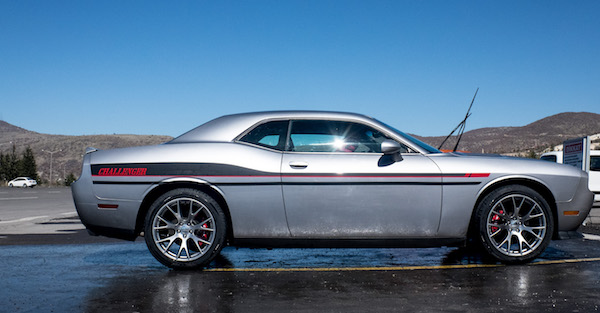 Chris McGrath/Getty Images
ANKARA, TURKEY - APRIL 01: A Dodge Challenger is seen at a car wash at a highway rest stop on the road outside Ankara on April 3, 2017 outside Ankara, Turkey. The capital, Ankara is the second largest city after Istanbul and an important economic and political hub. In 2015 and 2016 the city was hit by numerous terrorist attacks and suffered heavy damage to government buildings during the failed coup attempt on July 15, 2016. Campaigning by both the "Evet"(Yes) and "Hayir" (No) camps has intensified across the country ahead of Turkey holding a constitutional referendum on April 16, 2017. Turks will vote on 18 proposed amendments to the Constitution of Turkey. The controversial changes seek to replace the parliamentary system and move to a presidential system, which would give President Recep Tayyip Erdogan executive authority. (Photo by Chris McGrath/Getty Images)

On August 12th, Dodge began promoting its drag racing event in Michigan called “Roadkill Nights.” The timing of the tweets and the promotion couldn’t have come at a worse time. The Roadkill Show quickly recognized the error and quickly distanced themselves from the violence the following Monday.

Dodge however, was late to the game, but they did eventually delete the tweets and get on board condemning the connection. Automotive News reports that Dodge e-mailed a statement that included:

?It?s unfortunate that such a pure, safe, family friendly automotive event was linked to such a senseless, horrific act.?

During the same weekend as the original tweets, Heather Heyer was hit by a Dodge Challenger and killed while counter-protesting white nationalists in Charlottesville, Virginia.

Someone needs to get in touch with @Dodge to tell them to halt their "#Roadkillnights" ad campaign.
Very bad week for it. pic.twitter.com/mTKxH1tByC

Related: The new Dodge Ram can tow almost anything you could want it to

The initial backlash on social media was well deserved, and the company eventually deleted the tweets promoting #RoadkillNights.

Hey, @Dodge , maybe delete those #RoadKillNights tweets in light of recent events. Does nobody man your social media on Sundays?

Daily Stormer praised @Dodge for #RoadKillNights and the murder of Heather Heyer. These are still the top tweets on Dodge's Twitter timeline pic.twitter.com/aT4itwqxbu

omg @Dodge is it not painfully obvious how insensitive that #Roadkillnights hashtag is? https://t.co/axLrHomn2l

To be fair to Dodge, the tweets promoting the event were likely scheduled far in advance, and the timing of when the tweet came out was almost certainly a coincidence. But it’s still a bad look for the company for not immediately recognizing that one of its cars was used to kill a person protesting white supremacists, and it also injured 20 other people.