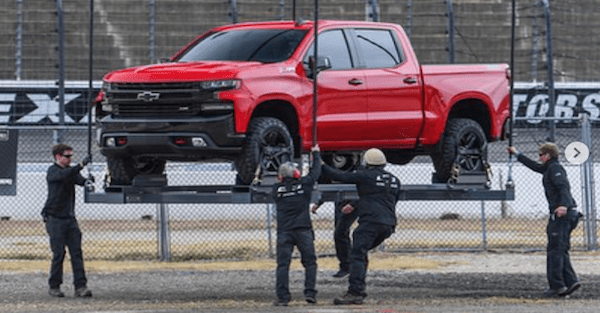 Pickup trucks are about as American as Apple Pie and the last couple decades has seen them transform from utilitarian workhorse to plush, luxurious family hauler. The change was a natural reaction to the American public’s love affair with the pickup and high-end gadget filled luxury cars. With crew cabs having around the same legroom as your average mid-sized car, its no wonder people prefer the useful truck much more these days.

GM knows they must milk the pickup, SUV, crossover craze as much as possible as you never know when gas prices are going to go up, and people are going to want economy cars again. According to Automotive News, GM product chief Mark Reuss said the company has been “constrained” when it comes to larger four-door pickups.

“We’re solving things like that,” Reuss said. A GM spokesperson declined to go into details according to Automakers News, but we may know what the plan is soon, with GM scheduled to unveil the fourth generation Silverado this Saturday in Detroit.

Crew cabs make up 60 percent of GM’s large truck sales which is up from 50 percent five years ago. Silverado sales rose 1.9 percent to 585,864 last year showing how important this segment is to the Detroit giant. The company reported that they’re spending $3 billion on retooling the three plants that build the Silverado and brother Sierra, with Ruess saying the company has a “laser focus” on customer needs with the next generation trucks.

With fierce competition from Ford and their ever-popular F-Series lineup, its important GM focuses not only on capability but fuel economy as well. GM is expected to add a 10-speed automatic transmission which they co-developed with Ford, and that should help in that regard.