After a special event set records, Bristol Motor Speedway wants to do it again 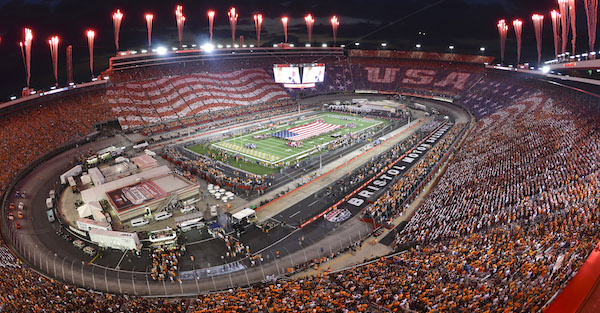 Bristol Motor Speedway has big plans for the future and they don’t involve NASCAR.

No teams have been announced yet, but it would likely be another college football game rather than an NFL game. Virginia Tech and Tennessee played at the Battle of Bristol on Sept. 10, 2016 in front of the largest crowd in history to watch a football game. The Volunteers won the game 45-24 in front of 156,990 fans.

Smith said via the Johnson City Press that he expects another game to be happening soon, though he didn’t reveal any exact dates or teams.

“We’re working on it,” Smith said. “Jerry Caldwell is working hard on it. I would say that another game will be coming at some point and you need to call the ticket office and get on the list.”

Caldwell also confirmed the plans, and he said they have been in talks with several college football programs.

“We will have another football game, absolutely,” Caldwell said. “Right now, there aren’t any details to be released, but we are continuing to have more good conversations and we are going to play football.”

The game between Tennessee and Virginia Tech was a success given how many fans were in attendance. Some of the seats weren’t in good locations, but that didn’t stop fans from showing up and watching.

There isn’t much downside for BMS to host more games, and if they continue to be successful, other tracks might follow suit.