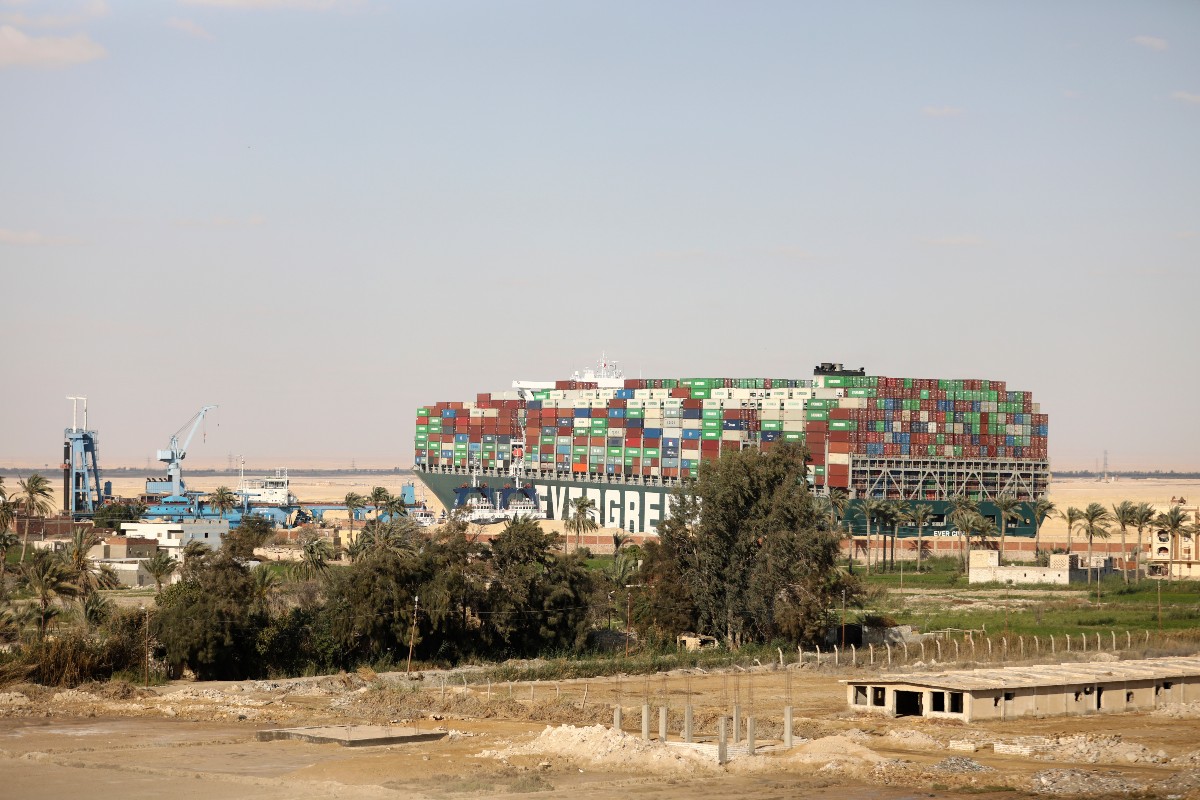 SUEZ, Egypt (AP) ? Salvage teams on Monday freed a colossal container ship stuck for nearly a week in the Suez Canal, ending a crisis that had clogged one of the world?s most vital waterways and halted billions of dollars a day in maritime commerce.

Helped by the tides, a flotilla of tugboats wrenched the bulbous bow of the skyscraper-sized Ever Given from the canal?s sandy bank, where it had been firmly lodged since March 23.

The tugs blared their horns in jubilation as they guided the Ever Given through the water after days of futility that had captivated the world, drawing scrutiny and social media ridicule.

?We pulled it off!? said Peter Berdowski, CEO of Boskalis, the salvage firm hired to extract the Ever Given. ?I am excited to announce that our team of experts, working in close collaboration with the Suez Canal Authority, successfully refloated the Ever Given ? thereby making free passage through the Suez Canal possible again.?

The giant vessel headed toward the Great Bitter Lake, a wide stretch of water halfway between the north and south ends of the canal, where it will be inspected, said Evergreen Marine Corp., a Taiwan-based shipping company that operates the ship.

More than 40 vessels that were anchored at the Great Bitter Lake waiting for the Ever Given to be freed have resumed their southbound journey through the waterway, according to canal services firm Leth Agencies.

Over 30 southbound vessels anchored off the Mediterranean city of Port Said are expected to enter the canal, it added.

Buffeted by a sandstorm, the Ever Given had crashed into a bank of a single-lane stretch of the canal about 6 kilometers (3.7 miles) north of the southern entrance, near the city of Suez. That created a massive traffic jam that held up $9 billion a day in global trade and strained supply chains already burdened by the coronavirus pandemic.

At least 367 vessels, carrying everything from crude oil to cattle, are backed up as they wait to traverse the canal. Dozens of others have taken the long, alternate route around the Cape of Good Hope at Africa?s southern tip ? a 5,000-kilometer (3,100-mile) detour that costs ships hundreds of thousands of dollars in fuel and other costs.

Egypt, which considers the canal a source of national pride and crucial revenue, has lost over $95 million in tolls, according to the data firm Refinitiv. President Abdel Fattah el-Sissi, who for days was silent about the crisis, praised Monday?s events.

?Egyptians have succeeded in ending the crisis,? he wrote on Facebook, ?despite the massive technical complexity.?

In the village of Amer, which overlooks the canal, residents cheered as the vessel moved along. Many scrambled to get a closer look while others mockingly waved goodbye to the departing ship from their fields of clover

The U.S. Embassy in Cairo tweeted its congratulations to Egypt.

While the canal is now unblocked, it is unclear when traffic would return to normal. Analysts expect it could take at least another 10 days to clear the backlog on either end.

The breakthrough came after days of immense effort with an elite salvage team from the Netherlands. Tugboats pushed and pulled to budge the behemoth from the shore, their work buoyed by high tide at dawn Monday that led to the vessel?s partial refloating. Specialized dredgers dug out the stern and vacuumed sand and mud from beneath the bow.

The operation was extremely delicate. While the Ever Given was stuck, the rising and falling tides put stress on the vessel, which is 400 meters (a quarter mile) long, raising concerns it could crack or break.

Berdowski told Dutch radio station NPO 1 the company had always believed it would be the two powerful tugboats it sent that would free the ship. Monday?s strong tide ?helped push the ship at the top while we pulled at the bottom and luckily it shot free,? he said.

?We were helped enormously by the strong falling tide we had this afternoon. In effect, you have the forces of nature pushing hard with you and they pushed harder than the two sea tugs could pull,? Berdowski added.

The crew on the tugs was ?euphoric,? but there also was a tense moment when the huge ship was floating free ?so then you have to get it under control very quickly with the tugs around it so that it doesn?t push itself back into the other side? of the canal, he said.

Jubilant workers on a tugboat sailing with the Ever Given chanted, ?Mashhour, No. 1,? referring to the dredger that worked around the vessel. The dredger is named for Mashhour Ahmed Mashhour, assigned to run the canal with others when it was nationalized in 1956 by President Gamal Abdel-Nasser.

Once the Ever Given is inspected in Great Bitter Lake, officials will decide whether the Panama-flagged, Japanese-owned ship hauling goods from Asia to Europe would continue to its original destination of Rotterdam, or if it would need to enter another port for repairs.

Canal officials also will do a detailed inspection of the area where the Ever Given was grounded, especially the bank ?to see how much of that rock has been displaced and might have impacted the deep water of the canal,? said Capt. Nicolas Sloane, vice president of the International Salvage Union who was involved in salvaging the Costa Concordia, the cruise ship that tipped over off Italy in 2012.

If all goes well, the canal authority could open up the waterway to a northbound convoy by Tuesday morning, he told The Associated Press.

The crisis cast a spotlight on the vital trade route that carries over 10% of global trade, including 7% of the world?s oil. Over 19,000 ships ferrying Chinese-made consumer goods and millions of barrels of oil and liquified natural gas flow through the artery from the Middle East and Asia to Europe and North America.

The unprecedented shutdown, which raised fears of extended delays, goods shortages and rising costs for consumers, has prompted new questions about the shipping industry, an on-demand supplier for a world now under pressure from the coronavirus pandemic.

?We?ve gone to this fragile, just-in-time shipping that we saw absolutely break down in the beginning of COVID,? said Capt. John Konrad, the founder and CEO of the shipping news website gcaptain.com. ?We used to have big, fat warehouses in all the countries where the factories pulled supplies. ? Now these floating ships are the warehouse.?

?Since most of the imports blocked over the last week are heading to Europe, U.S. consumers will likely see little effect on prices of U.S. imports, except to the extent that intermediate products of U.S. final goods are made in Europe,? said Bergstrand, professor of finance at the University of Notre Dame?s Mendoza College of Business.