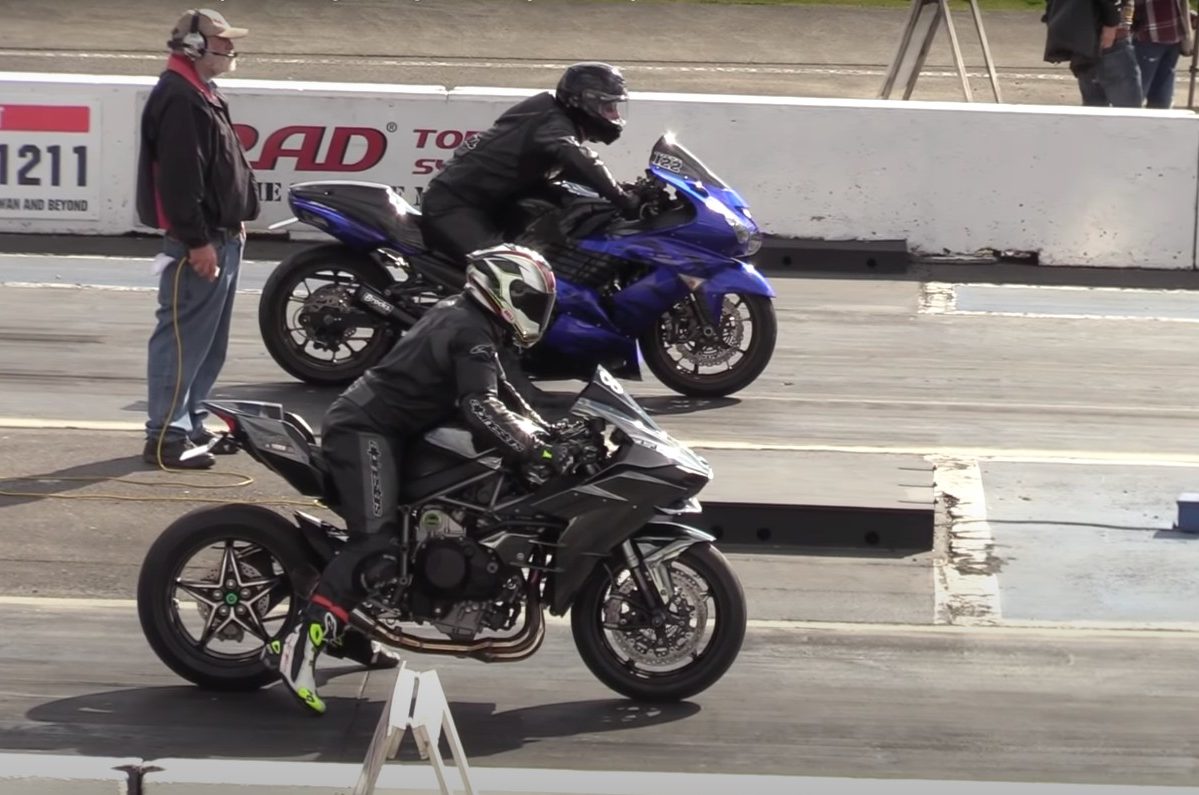 Motorcycle drag racing is always fun to watch, but the best races usually come when you have a match-up between two sport bikes that are very similar in performance. When you get races like these, it focuses more on the skills of the rider rather than whose bike is faster. This battle between a Kawasaki Ninja H2 and a Kawasaki Ninja ZX-14R is the perfect example of that. They get a couple good races out of the day, and I guarantee you’ll figure out who the more consistent rider is by the end of it.

It’s kind of a breath of fresh air to see two Kawasakis going down the track instead of the incredibly popular Suzuki Hayabusa. That’s not to say it’s not a good bike, but man, it sure is a common one to see out on the drag strip. When the below video starts, you’ll see how the ZX-14R rider does his burnout. That’s a good sign that he’s no rookie to the track. But, will he be able to take down the H2 superbike?

Well, when you watch the video, you’ll see that the ZX-14 was all over the sporty H2. The rider nailed most of his starts and put down some pretty good quarter-mile times. Now, with that being said, he did have just a slight advantage with his extended swingarm, which gives it a longer wheelbase and lowered suspension. It does appear that the bike is set up for this type of racing, and that is not the case for the H2. As you can tell in the video, the H2 rider just could not get that front wheel to stay down. With its supercharger, that bike has a ton of power, and it’s hard to keep it contained. I also think that if he got the timing on his launches a little better, he could have been much more competitive. You can see he red lit quite a few times.

The Kawasaki ZX-14R might not have a turbo or a supercharger, but it’s got a massive engine to make up for the power. There’s no replacement for displacement.

A 1400cc engine with fuel injection makes the power, and it’s held together by an aluminum monocoque frame. Often found on most bikes, it also features a liquid cooling system and a 6-speed transmission with a chain drive. With a 31.5-inch seat height and adjustable suspension, just about anyone can hop on this thing and feel comfortable on it. This bike basically begs you to peg that speedometer out, because it absolutely thrives at full throttle. If you want to take it all the way, you’ll hit a top speed of right around 186 MPH.

This is a top-of-the-line Kawasaki bike, so it’s decked out with all kinds of goodies. Starting with the structure, it’s held together by a Trellis high-tensile steel fram, and powered by a supercharged, liquid cooled, 998cc engine with a 6-speed transmission. The compression ratio is 8.5:1. Front suspension consists of an inverted fork with rebound and compression damping. The rear suspension features a Uni-Trak, öhlins TTX39 rear shock. Electronic rider aid includes a cornering management function, traction control, launch control, ABS, a quick shifter, and even more. In its stock form, this bike is also capable of a top speed of 186 MPH.

So, while one bike is slightly newer than the other, performance wise, they are pretty identical in a lot of ways. They even have the same top speed! That makes for some damn good racing like we saw in the video up top. When it came down to it, the riders determined who won that race and the Kawasaki ZX-14 comes out on top. That guy sure knew how to handle that great bike!