Elvis Presley wasn't just the King of Rock and Roll. He was also the king of the streets.

If you know anything about the legendary entertainer, you've likely seen a few of the vehicles in his collection. He had Lincoln Continentals, Cadillacs, GMC pickup trucks, and trikes. Even beyond his memorable three and four-wheeled rides, he also amassed a quality collection of motorbikes throughout the course of his days in the spotlight.

In particular, Presley and Harley-Davidson motorcycles were a perfect match. They suited his unique style, and the sight of him riding down pretty much any road in America was guaranteed to draw attention from any and all bystanders.

As a tribute to the late Memphis, Tennessee legend, let's check out the three most desirable Harleys that he owned. 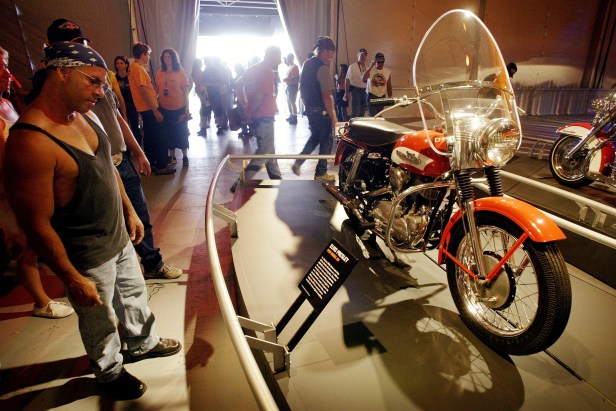 MILWAUKEE, WI- AUGUST 28: Spectators look at Elvis Presley's 1956 Harley-Davidson motorcycle at an exhibit August 28, 2003 in Milwaukee, Wisconsin. Harley enthusiasts began arriving in Milwaukee yesterday for a celebration of the manufacturer's 100th anniversary. The four-day event, which began today, is expected to draw over 250,000 people. (Photo by Scott Olson/Getty Images)

3 of the Coolest Harley-Davidson Bikes in Elvis Presley's Collection

Presley was still in the early stages of popularity back in 1955. Even still, he decided to purchase his brand-new KH from a local Harley dealership in Memphis. It was the predecessor to HD's sportster.

Elvis' Harley came in a two-tone Pepper Red color scheme, with chrome trim to top it off. He opted for a windshield and a "buddy" seat, so that he could bring his beautiful female friends along for the ride.

The bike's popularity skyrocketed after Presley's Harley was featured on the cover of the '56 issue of Harley-Davidson's The Enthusiast magazine. He eventually sold it in 1956 to his friend Fleming Horne, who ended up selling it back to Harley in 1995.

Following the sale of his KH, Elvis immediately upgraded to a FLH. However, that was back in 1957. The many FLH models that he had were all memorable, but the '76 model in particular was pretty significant.

It marked the last motorcycle that Elvis would ever purchase. It came with a two-tone paint job, chrome accents, and a beautiful stitched-leather seat. It was delivered directly to Graceland, and while he managed to get some riding time in, he eventually sold it back to Harley just 90 days before he passed away.

Pioneer Auto Museum in South Dakota eventually got their hands on it, where they displayed the memorabilia for over 30 years. In 2019, it was put into Kruse GWS Auctions' Artifacts of Hollywood sale, where it sold for $800,000, making it the third most expensive motorcycle. 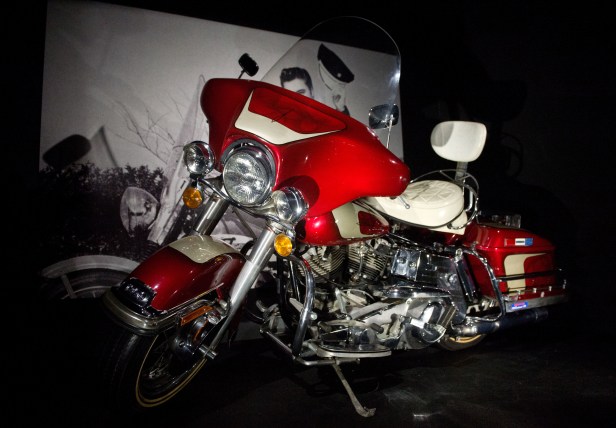 "1976 Harley-Davidson Electra-Glide Motorcycle", part of "Elvis at the O2 - Direct from Graceland" exhibition in London. Elvis at the O2 is the largest Elvis retrospective ever mounted in Europe. (Photo by Zak Hussein/Corbis via Getty Images)

One of the more unique Elvis Presley motorcycles was the '66 FLH chopper. Elvis lived in Los Angeles at the time, and choppers had experienced a surge in popularity durirng the late 1960s.

The bike showcased a peanut tank, narrow extended front forks, and a ridiculously tall rear seat with a sissy bar so that Priscilla could ride along with him. It was an interesting bike to say the least, but it surely brought in attention. I can't think of any better way to cruise around Beverly Hills.

To be sure, Presley's name is more synonymous with music than motorcycles. That said, the man was a notable collector. And, while Harley-Davidsons only made up a portion of Elvis' bike collection, it's pretty clear that they really helped contribute to his badass image.