Rolls-Royce Cullinan: The World’s Most Expensive SUV Is the Real Deal 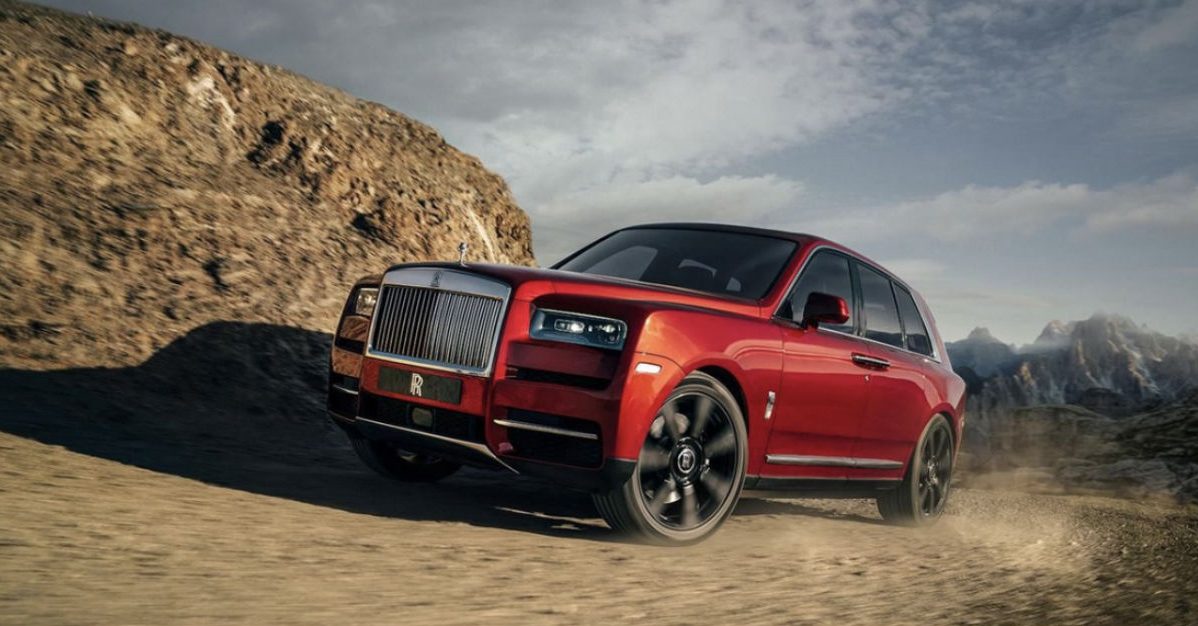 Cynics snickered when Rolls-Royce Motor Co. announced in 2015 that it would build a luxury SUV. They snickered a little more when the fabled English car company said the SUV would be named Cullinan, after the world?s largest gem-quality diamond, and would cost more than $300,000.

An all-season, off-road, ultra-luxury SUV? From Rolls-Royce? Called what? And for more money than most Americans paid for their houses? Ridiculous!

Keep snickering. The 2019 Rolls-Royce Cullinan is here, and it is ridiculous. And rather wonderful.

Tipping the scales at an elephantine 5,984 pounds, propelled by a massive 6.75-liter V-12 twin-turbo engine, the Cullinan looks like what Rolls-Royce says it is: ?The world?s first super-luxury all-terrain SUV.?

It?s enormous ? 17.5 feet long, 7 feet wide and more than 6 feet tall, riding on 22-inch wheels ? and imposing, from the traditional Rolls-Royce grille, across a hood long enough to contain the V-12 engine, all the way to the gaping rear hatchback doors.

The result is one of the oddest-looking vehicles ever built. It incorporates design elements no other car company could possibly attempt. The Cullinan is like a large milk truck, with a cow catcher attached to the front, that is elegant enough to transport members of the royal family to Royal Albert Hall.

The enveloping front seats were heated, ventilated, endlessly adjustable and included massage functions. The enormous rear seats ? the Cullinan can be had in four- or five-passenger versions ? offer vast head and leg room, and are also highly adjustable.

They face drop-down ?picnic tables,? above which are high-definition entertainment screens. The center console between the rear seats can be fitted with accessories such as a beverage service area that includes a Champagne cooler. Each rear passenger seat has its own climate control settings.

Our latest #rollsroycecullinan to arrive from the Home of #rollsroyce and our first one in Dark Emerald complimented with Moccasin and Black leather with Open Pore Mimosa Negra veneer.

A post shared by Rolls-Royce Sunningdale (@rollsroycesunningdale) on Jan 16, 2019 at 3:02am PST

The front and rear ?suicide? doors open and close electronically, and silently, with the push of a button, enclosing driver and passengers in a cozy cocoon. But the enormous windshield and tall, wide side windows create wondrous visibility. The panoramic glass sunroof retracts far enough for a rear passenger to stand up and parade-wave, like a queen, to the multitudes.

Is it drizzling? Open the rear door, push another button and an umbrella glides gently into your hand ? or, presumably, into the hand of the staff member entrusted with keeping you dry as you exit the vehicle.

Behind the rear seats is a storage area big enough to accommodate all the golf clubs, gun bags, luggage or picnic equipment you?d need for a proper ?Downton Abbey? weekend outing.

Rolling Mansion – Seeing the Cullinan in RReal life causes one to literally stand in awe, at the sheer magnificence of what is known as the world's most luxurious SUV. Check our stories to see the Malaysian launch of the RR Cullinan #zthcullinan #cullinan #rollsroyce #rollsroycecullinan #rollsroycemalaysia #zerotohundred

The motoring experience is peerless. Never, perhaps, has so much power been combined with so much plush. The Cullinan, whether easing through city traffic or pulsing up the open road, could almost be mistaken for an electric vehicle.

It is silent, throbbing gently and making the faintest purr only when under extreme acceleration, and smoothly indifferent to imperfections in the road, thanks in part to the sophisticated air suspension system. .

I experienced no difference whatsoever ? in wind noise, road noise or vibration ? between 50 miles per hour and twice that. (The Cullinan boasts an electronically limited top speed of 155 miles per hour.I?m sure it?s kittenish at that velocity, too.)

The extreme silence ? reportedly the result of specialized foam in the front wheels, laminated glass and hundreds of extra pounds of sound-deadening materials ? allows the ?bespoke audio? and ?rear theatre configuration? to work at maximum perfection.

I cued up Handel?s ?Water Music? and set the navigation, one of the best I have ever experienced, for a destination 120 miles to the north. Two movements later, it seemed, I had arrived.

The 30-gallon gas tank allowed me to get there without refueling ? not entirely a surprise for a tank that size, except that the Cullinan consumes fuel at an average rate of 14 miles per gallon. (The Cullinan MSRP includes a $2,600 ?gas guzzler? fee.)

On the return trip, I decided to test the off-road capabilities. Somewhere in the Tehachapi foothills, near Willow Springs, I left the highway for a stretch of unpaved side road, engaged the ?off road? mode and allowed the Cullinan to be a real SUV.

First I assayed a quarter-mile of sand. Then I pushed a button to raise the vehicle and increase the ground clearance, and climbed a rocky hill. On the other side, I engaged the automatic hill descent system and let the Cullinan apply the correct amount of braking to bring us safely to level ground again.

Then I turned around and went back up the opposite way, enjoying the Cullinan?s quiet, capable demeanor. It kept calm, and carried on, until near the top, when its street tires spun and struggled to find enough traction to get over the top. Once over, I returned to the sandy road and drove a few miles through the tumbleweeds and sage brush.

It?s possible that a bolder driver could have done more with the rough stuff than I did. But I was alone, and off the cellular grid, and a voice in my head kept saying, ?Dude, you remember this is a $400,000 automobile, right?? (That?s with various options; the base is $325,000.)

Perhaps mindful of its own MSRP, and the concurrent high cost of repairs, the Cullinan is equipped with an impressive suite of sensors to help the driver avoid scraping the curb, hitting parked cars or backing into pedestrians.

While many cullinans are getting customised, here is one more from #kentucky – #RollsRoyce_Fan , @louisville_exotics By : @michele_noh

The backup camera view can even be adjusted, from the infotainment screen in the dash, to focus on specific areas of concern ? when backing around a tricky obstacle, for example.

But the Cullinan does not park itself, and seemed to be missing some of the driver aids that one would expect from such an advanced, expensive vehicle. Though the vehicle does come equipped with adaptive cruise control, it does not include other semiautonomous driving technology, now standard on most luxury vehicles, that can make an inattentive or irresponsible driver safer on the road.

And I was troubled to see that, on the car I borrowed, the lovely Spirit of Ecstasy statuette that sits on the Cullinan grille did not retract and then reemerge when directed.

On the other hand, the Cullinan comes standard with ?self-righting wheel centers,? which means the double-R Rolls-Royce emblem is always right side up when the car is parked.

Rolls is coming very late to the SUV game. Having held out long enough to watch the arrival and sales successes of Porsche?s Macan and Cayenne, Maserati?s Levante, Alfa Romeo?s Stelvio, Bentley?s Bentayga and even the Lamborghini Urus we reviewed here recently, Rolls is the last luxury brand but Ferrari to put a utility vehicle into its line.

Someone who is not a buyer for this car may ask, reasonably, Who is the buyer of this car? BMW-owned Rolls-Royce, which just completed its best sales year ever, says that fully half of the buyers of its new SUV have never owned a Rolls before, and that the average Cullinan customer already owns about five other vehicles. So, potential buyers are probably not asking ?How much is it?? but ?How good is it??