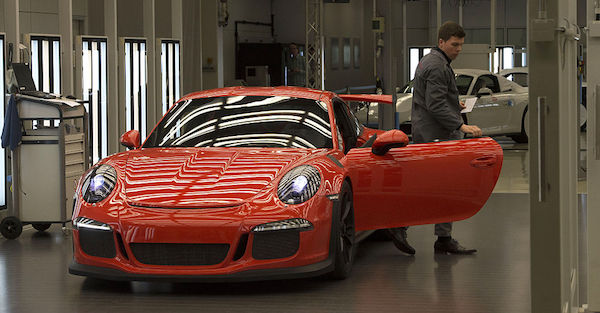 Thomas Niedermueller/Getty Images
STUTTGART, GERMANY - MARCH 10: A worker checks a newly assembled Porsche 911 GT3 RS at the Zuffenhausen Porsche production plant on March 10, 2015 in Stuttgart, Germany. The 911 GT3 RS is Porsche's newest high-performance car and the company recently presented it at the 2015 Geneva Auto Show. Porsche will announce the company's financial performance of 2014 in Stuttgart on March 13. (Photo by Thomas Niedermueller/Getty Images)

Cody James, a 22-year-old from California, walked into a Porsche dealership without an appointment to check out the Porsche GT3RS.

James said the employees at the dealership didn’t come to greet him, and they profiled him based on his age because they didn’t think he could afford a Porsche. An employee greeted him and told him they don’t allow joyrides, and another employee Googled him and was looking at his page on Forbes.

James detailed the whole encounter on his Facebook, including how unprofessional the employees at the dealership were when he wanted to look at the car.

Jalopnik ran a story about the incident, and they criticized James for not making an appointment first, which is recommended before going to look at a nice car.

The story on Jalopnik assumes James isn’t wealthy enough to buy the car, and they said he should have acted like a “serious buyer.”

Well, James saw the story on Jalopnik, and he responded and defended himself again after being misunderstood for the second time about the same incident.

James said on Reddit that he didn’t ask for a test drive, and he said he isn’t some spoiled kid who has no clue about cars.

“A Jalopnik author saw an opportunity to teach me to not ask for test drives (I did not want a test drive at any point) and took the side of the dealership, perpetuating some erroneous pre conceived notion that I’m some spoiled kid… because I saved up for a mid level exotic despite coming from a middle class family in a downhill drug filled town with my biological father leaving young. (Still was raised by my step-Dad),” James said.

He added that he enjoys the Jalopnik author’s stories, but the author, Tom McParland, refused to approve any of James’ comments on the situation on Jalopnik.

“I offered “Tom” the author to reach out to me and ask any questions he likes, but he refused to approve any of my Jalopnik comments on his article,” James said. “Though 95% of the people who read it were able to demarcate bias from story.”

Jalopnik did edit the story to clarify that they didn’t mean to disparage James, but wanted to offer advice to anyone who wanted to avoid the same treatment he received in the future.