Batman has a new daily for the upcoming Justice League film 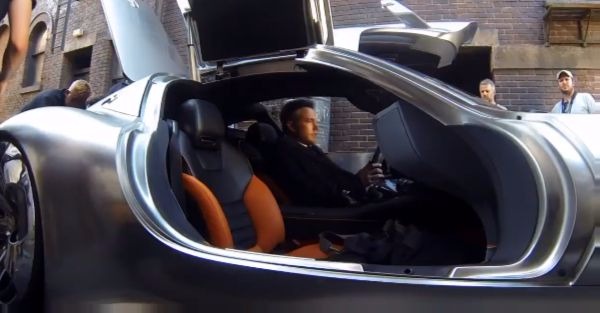 Bruce Wayne had been a loyal Lamborghini customer, using various Lambos as his daily driver throughout the Chris Nolan trilogy of films. He first drove the fittingly named Murciélago (Bat in spanish) then later an Aventador.

They served him well, most notably being employed as a witness protection defense mechanism in the Dark Knight.

But, time goes on and Batman’s daytime brand needed something new. Enter the Mercedes AMG Vision Gran Turismo. This is the vehicle of choice for the Justice League version of Batman for all non-crime-fighting related errands.

According to Carscoops, the concept car had to be scaled up by 10% to fit actor Ben Affleck. Chief Design Officer of Daimler, Gordon Wagener, said of Batman’s new ride:

?As a designer, you have to create fantasy, so we often get inspired by the film industry. I am excited that this time, the film industry was inspired by us and our Mercedes-Benz AMG Vision Gran Turismo became the car for a super hero. Extreme proportions, sensual contours and intelligently implemented high tech blend to form a breathtaking body and the perfect car for Bruce Wayne.?

Honestly, he could strap a few batarang launchers to the hood and give his other, more famous ride a run for its money.

Related: A drag race pits iconic Batmobiles against each other to our inner child’s delight