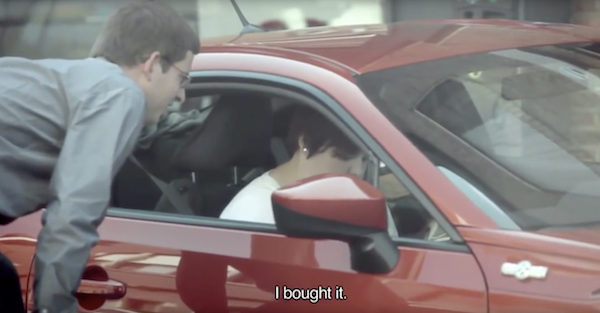 It’s not always easy revealing that you’ve made a big purchase without consulting your significant other. Around 98% of the time, doing so makes you and enormous, inconsiderate jerk. But aside from being a total tool, sometimes annoying the living hell out of someone is just really entertaining.

Which is why this 2012 commercial for the Toyota GT86 and Subaru BRZ, a commercial that could sub itself as the dictionary definition of schadenfreude, is so brilliantly funny. It depicts the relationships of several severely unstable couples as the male partner unveil their latest purchase.

The revelation that their partners bought a car doesn’t prompt the reasonable response of, “dear, you ass, how did you pay for this? Was it with Erik’s college fund? It was? My mother was right about you.” Instead, all of the women in the video erupt into violent rage during a cringe-inducingly sexist compilation of footage.

All of that aside, it’s funny. Watching someone erupt into a fever-pitched righteous rage over fiscal irresponsibility will always be hilarious.

The most mysterious part of this video remains: Who the hell is the long haired man-child running around, half-naked in the dirt?!