This is an ingenious way to handicap races 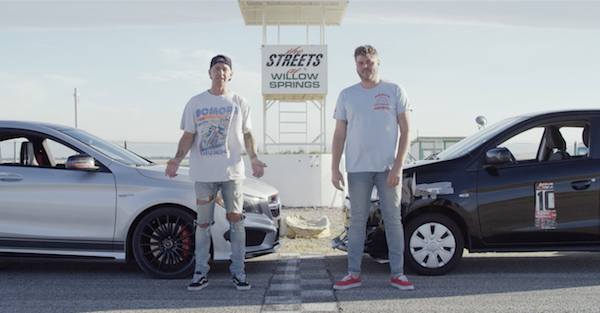 It’s easy to imagine. The first episode would pit Michael Schumacher in a Ford Pinto against James “Captain Slow” May in a Koenigsegg Agera R. It’d be so glorious!

But, until some exec at Netflix takes notice and dedicates some time to giving the people what they want (looking at you, Ted Sarandos), we’ll just all need to settle for 2 minutes and 21 seconds of ridiculousness, courtesy of Donut Media.

In the video, noted slow driver, James, takes on noted fast driver, also James. The catch? Slow James is driving a Mercedes Benz CLA 45 AMG with 330hp and RED SEAT BELTS! Those are the fastest seat belts you can buy, science has shown as much. Meanwhile, fast James is sporting a 2015 Mitsubishi Mirage, with extra babies.

Related: How much horsepower does it take to beat a lowly Miata?