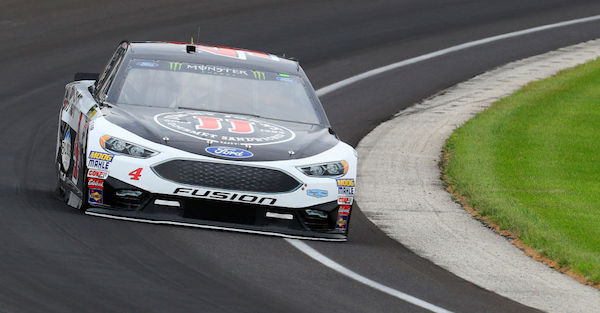 NASCAR officials are apparently strict when it comes to handing out and revoking credentials for crew members. Kevin Harvick’s spotter, Tim Fedewa, learned that the hard way.

While Harvick was practicing for the Brickyard 400, Fedewa mishandled a sandwich and dropped it over the side of the railing. Audio of the incident was captured on NBC during Harvick’s practice.

Oh no… 🙈@KevinHarvick's spotter's hard card was reportedly taken away after his sandwich fell off the pagoda at @IMS! 😂#NASCAR pic.twitter.com/dDNBdl7AxF

Related: Playoff contender said the end of the Brickyard 400 was “ridiculous”

When Fedewa went to retrieve his sandwich, his credentials were revoked by NASCAR officials, so he couldn’t get back up to where he was spotting for Harvick.

Fedewa was tossing sandwich to someone, it got fumbled over the side. IMS mega pissed, Fedewa temp lost hard card but got it back. https://t.co/Bn7e9uBt9t

Fedewa got his credentials back about 45 minutes after the practice session ended. No word on whether the sandwich survived the fall.