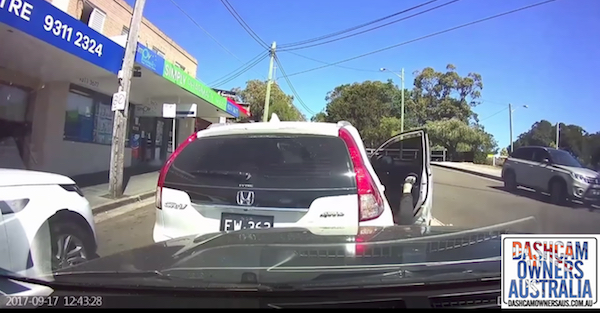 You ever been so mad you hit yourself with a car? Like really, really mad.

Probably not, you likely haven’t made the series of poor life decisions that led you down a road that ended with you losing a sandal and your dignity. But thank whatever higher being there is that some random driver in Malabar, New South Wales had a dash cam equipped to record someone actually making those choices.

Let’s break this incident down:

The driver with the dash cam honks at the guy in the CR-V. This angers the CR-V driver, who slams on his brakes and begins to hop out of the car. The car starts to roll back — apparently the driver missed park and went straight for reverse. What follows is a rapid series of events, seemingly without explanation. The offending driver is struck with his own door; he goes down and loses a sandal; his passenger hops out of the car, bewildered; the driver gets up and yells at the car behind him; then he finally hops back into his car to leave the scene, and his passenger.

That’s going to be an interesting police report.