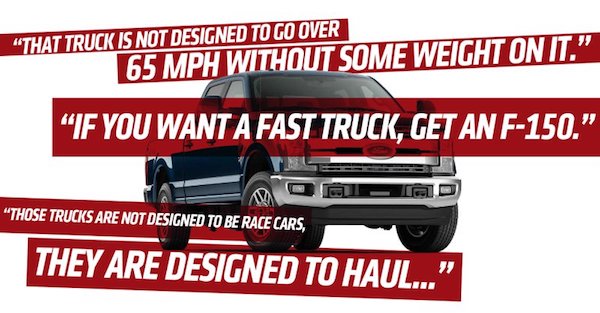 Dealerships have a fairly bad reputation for playing tricks on their customers (it should be noted that this definitely doesn’t apply to all dealerships but enough to inspire a cliche), but this dealership employee telling a customer his truck wasn’t designed to go over 65 mph might just take the prize as the most ridiculous automotive falsehood in history.

The driver, who is reportedly named Brenden, brought his new 2017 Ford F-250 Platinum Diesel into the AutoNation Ford dealership in Littleton, Colorado, after he discovered a terrifying front-end wobble when he drove his $70,000+ truck at speed.

After holding onto the truck for three weeks, which irritated Brenden enough that an altercation between him and the dealership warranted the police showing up, the truck was finally fixed. In the meantime, a representative from AutoNation tried to explain to Brenden that his truck was just not meant to drive at 65mph.

Jalopnik’s David Tracy reached out to Ford to verify if F-250s weren’t designed to hit the speed limit, and Ford said:

“The AutoNation employee?s recorded statements in the video in question are not a reflection of AutoNation?s ideas or standards when it comes to our customers? service experience and we regret that he was given false information.

As the nation?s largest automotive retailer we strive for excellence in customer satisfaction and safety. When this customer brought his F-250 to our service center we were unable to recreate the issue which is when we initiated the buyback process between the manufacturer and the customer. It?s our understanding that this process is currently underway and we are no longer involved at this time.”

Turns out the whole issue revolved around bad ball joint and not the truck’s top speed.