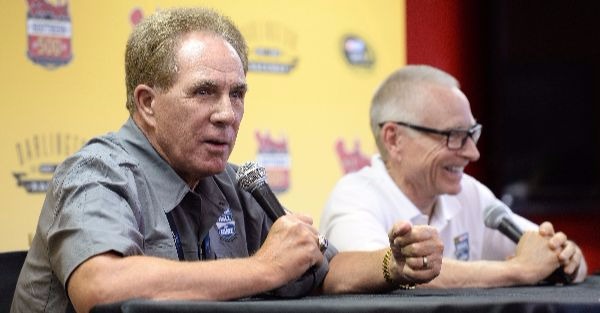 The man is known as Nascarcasm. A man from Indianapolis that runs a popular social media account where he cracks-wise about anything and everything NASCAR. He occasionally does work for NASCAR.com that is nearly always a riot.

One day, he went too far. After Joey Logano’s win at Richmond was ‘encumbered,’ @Nascarcasm fired up the ‘ol Twitter account and said a thing.

Furthermore it's not like @joeylogano isn't gonna win again before playoffs. He will. If he doesn't, I'll tattoo DWs face on my inner thigh.

Yikes. Promising to put a tattoo of Darrell Waltrip’s face on your inner thigh is a weirdly specific level of confidence even though, at the time, betting on Joey Logano to win a race to clinch a playoff berth was a pretty safe bet. The consistently competitive Logano did just win a race after all. How much could a suspension just micrometers out of spec have helped him?

By now, you know the story. Logano entered into a slump and never won another race. Sadly for those prone to making tattoo bets, the internet never forgets, leaving the man behind the @Nascarcasm account with no choice. In his own words on NASCAR.com:

“I never make a promise without following through with it, or having a way to completely weasel out of it without any legal repercussions.”

So, check it out: Darrel Waltrip’s face in tattoo form on a self-described twitter troll’s inner thigh:

ON #NASCAR.COM: I bare my soul and inner thigh -> https://t.co/VFjc6tdoqX pic.twitter.com/9bd04HFLNv