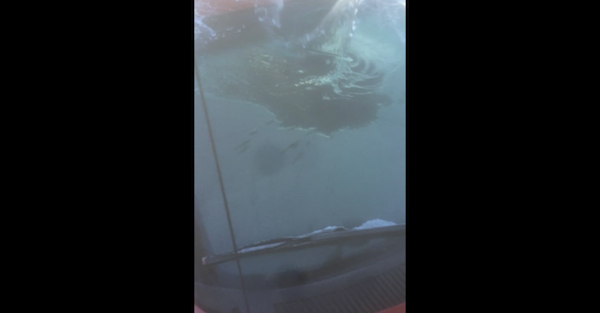 Pouring boiling water on a frozen windshield is a winter driving myth that needs to be stopped before it does any more damage. There’s no telling how many windows it’s claimed already, but let this be your final warning — pouring hot water on your iced-over windshield is a no-good, very bad idea.

One YouTube experienced why this old myth is not the greatest idea first hand; fortunately for everyone else he filmed it. He recorded the video for a Fargo, ND, car club, Fargo Cruising, claiming that he was about to prove that this method was one of his preferred ways to de-ice his Dodge Neon’s windshield.

He reached the car, bowl of water in hand, and dumped the warm water all over the windscreen. In a second he had cracked his windshield and is now faced with finding a new windscreen for his Neon, which is apparently pretty hard in Fargo.

Next time, he can make his own combination to prevent, via DIY Network:

“Three parts white vinegar to one part water sprayed on the windshield and windows and wiped off will keep ice from developing.”

Or clear it up, also via DIY Network:

“Combine one two parts 70% isopropyl alcohol with one part water and add a few drops of dish soap.”

Our favorite bought-at-the-store option is this Prestone de-icer with a built-in scraper.