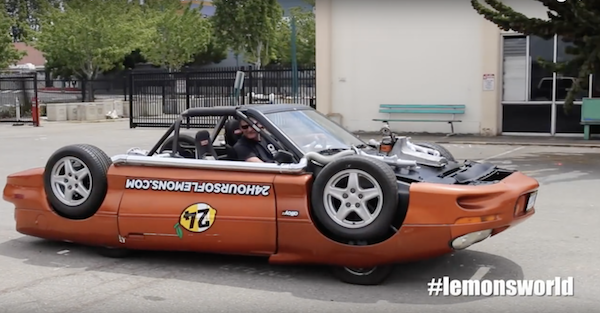 If you’ve ever lived under the lurking eyes of a home owners association, you know they can be a huge pain in the butt. The HOA is always looking for violations, so if you’re a gearhead that’s always working on a weird project, you are their prime target.

According to Jalopnik, one of these pesky associations decided to bother one of the most famous cars in the 24 Hours of Lemons race—the completely street-legal Upside-Down Camaro.

Oddly enough, this is probably one of just a handful of Lemons cars that are actually legal yet the HOA stated:

“All Permitted Parking Areas shall be used solely for the parking of motor vehicles used for personal transportation.”

The Camaro body sits upside-down on a heavily modified 1990 Ford Fiesta and owner Jeff “Speedycop” Bloch has built quite a few of these odd ball Lemons cars. Some of his most noteworthy creations include a car that looks like a helicopter, one that looks like a plane and even a station wagon from National Lampoon’s Vacation.

Although the car is owned by Bloch, he was not on the receiving end of the association’s letter. Instead it was racer Dave Montoya who had barrowed the car from Lemons HQ. His response is pretty epic as according to Jalopnik he: “Told them to piss off.”

Montoya is sending them footage of the car driving down a California highway legally, so that should put to rest any of the association’s worries that this isn’t a real car. He might get away with it this time but knowing associations they may just add in a new clause that reads like this:

“No weird Lemons cars allowed, especially ones made by Jeff Bloch.”