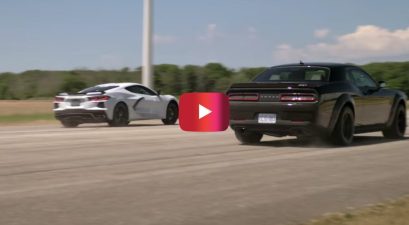 You know what they say: When life gives you lemons, make lemonade. Well, one Canadian jet boat driver cruising up the Graham River in British Columbia took the sentiment of that saying and applied it to something way more badass than fruit and fruit-based drinks.

As you can see from the video, when life (or, more accurately, beavers) gave this dude a dam, he turned that sucker into a ramp. Sunglasses on, hat backwards, this guy wasn’t playing around. He was whipping that boat all over the place, carving up waves like he meant business. Then, it was up and over that pile of sticks like it was nothing. I mean, my man SENT it. If he were drinking a beer, he would’ve told someone to hold it. Full speed ahead!

Read More: Wild Video Shows Boat Throwing Driver at Full Speed, but Then Some Quick-Thinking Fishermen Come to the Rescue

Dam, that was awesome! Pun very much intended. Sorry, I couldn’t resist. Had to do it. Now, as one YouTube commenter writes, “Good thing that was a jet boat or it would’ve ruined the lower unit.” Good point, considering that had our man not been driving a jet boat, it would’ve made for a much different type of video. As in the kind that has “FAIL” somewhere in the title.

With that in mind, I’m not one to root for injuries or anything, but if this driver were really hardcore, he would’ve come back around and taken his boat down the other way. Just really launched that sucker. THAT would’ve been an insane stunt. A costly and probably pretty painful stunt at that, but definitely worth it for the footage. What’s a couple broken bones if you’re racking up thousands and thousands of YouTube clicks?