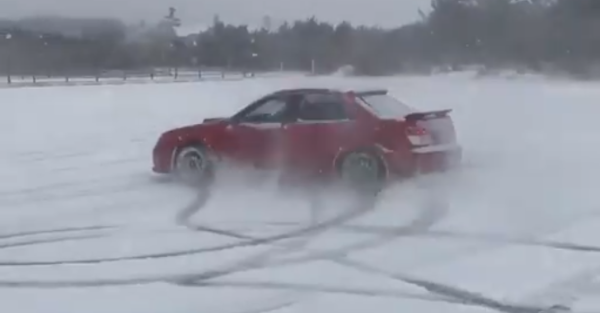 The so-called “Bomb Cyclone” has blanketed the East coast of the US in snow, bringing with it frigid temperatures and cutting wind. Anyone could be excused for wanting to bundle up and stay inside in these conditions. But Ansel Elgort, the star of our favorite 2017 movie “Baby Driver,” is not one to just sit inside.

Here he is taking on mother nature’s worst and turning into an opportunity for some good old-fashioned sno-nuts. He’s even doing it in a Subaru WRX used in the movie.

Nyc snowstorm no worries baby will give u a ride 😎 pic.twitter.com/oUyVi787BH

Related: Even this millennial New Yorker can learn to love cars

Elgort wasn’t always a grade-A hoon. When filming began, Elgort only had his license for four years, had never personally owned a car and could not even drive stick.

This meant some serious work was in order before he could star as a wheel man in a blockbuster summer movie. Enter stuntman Jeremy Fry. Under Fry’s instruction, Elgort learned everything from the basics of how to use a clutch to the advanced stuff like J-turns and drifting.

The experience so changed the 23 year old actor, that he knew exactly what car he should have as his first. Although he grew up wanting a classic C3 Corvette, his love of his automotive co-star left him begging the studio to let him have one of the red Subaru WRX’s used in the film.

“I just kept asking, asking, asking. And eventually, they finally said fine, you can have one. We wrapped the film last May. I finally got it in March. They gave it to me for my birthday.”

Now that he’s learned all the tricks, he’s an honest-to-god car nut:

?Now I?m a total car guy and I love driving stick,? Ansel says. ?When it?s raining and I?m in Long Island, and I know I have a little bit of loose traction, I always do a power 90 into the driveway. I love it when a car is behind me?not too close, but a little bit?so they?re like, ?What the fuck was that???

After nine months with his new car, it’s good to see he still gets it out and gives it a good work out now and then. Even a Bomb Cyclone couldn’t slow down Baby.